Continuing with the HMM in Penang

I was at the HMM craft bazaar in Penang last weekend, together with Zarina and several others from the Arts&Craft Guild of KL & Selangor (ACG).  Initially, I planned only to do a demo of my tatting, so I prepared a number of tatting starter kits to teach visitors.  Then, I realised I should have some samples of my tatting and started to tat simple pieces like bookmarks, hairclips, and inserts for key-rings.  That took me almost one whole month.

I was my first time putting up a table at a bazaar and I was not looking to make significant sales, though I did sell some bookmarks and tatting doodles.
I was happy that I managed to get four visitors curious and keen enough to sit down and learn to tat there and then, and they managed it quite well under the circumstances.

I started them off with making double stitches on chains with two different coloured threads.  This seemed the proven method as mentioned by so many tatters before, and it worked this time too.  They caught the double stitches soon enough and had no problem with the rings after that.  Even if I did not make much from the sales of my tatting, I was really happy to be able to add to the number of tatters.  I hope they'll keep up with it.

I also received enquiries for consignment/commission work.  I had to tell them that I am not able to accept such request at this time.  As a tatter, I know that tatting is a time-consuming craft and I am not comfortable working within another person's timeline.  That is my personal feeling, though I accept that other tatters may feel differently.
4 comments:

Email ThisBlogThis!Share to TwitterShare to FacebookShare to Pinterest
Tags ACG

It has been almost a week since the HMM (Hand Made Market) and only now I managed to find time to write about it.

To recap, the HMM is one of the many activities put together for the month-long (15 June - 15 July) George Town Festival in conjunction with its UNESCO World Heritage Listing in 2008.  It is a celebration of the Art, Culture and Heritage of the people of George Town performed within and alongside its historical landscape.

The Arts and Crafts Guild of KL & Selangor was invited to participate in the HMM and a group of us came together to put up tables to sell our hand-mades as well demonstrate our crafts. The Guild arranged for a special coach to take us up north 350km away to Penang, which turns out to be the most sensible option considering all the stuff that we brought along.  I was there to show my tatting.

I tatted a number of items that I hope will create some sales, but my focus was more to bring tatting to the masses.  I prepared tatting kits for beginners hoping to get some of the visitors to try.  I think I did quite well considering that I managed to teach four of them to tat.  There were lots of enquiries regarding classes at later dates which, unfortunately I could not confirm on that day since I am not residing in Penang.

Anyway, enough of the ramblings.  Here is a slide presentation of photos taken during the day. Maybe not yet.  Seems to be taking forever to upload the photos for the slideshow.

In the meantime, rest your eyes on these unique street arts scattered along the streets within the heritage enclave of Georgetown. There are many more that I missed because we did not walk by the roads or lanes where they are.

Preparing for the HMM

HMM is the Hand-Made Market held in conjunction with Georgetown Festival (GTF) to be held in Penang this month. 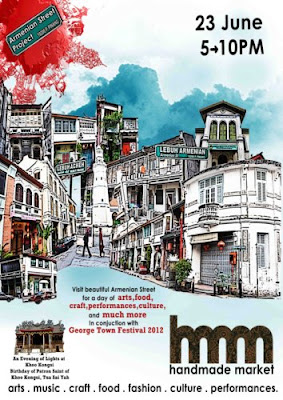 The Arts & Craft Guild of Selangor and KL (ACG) have been invited to participate in the handmade market and participating members are currently busy preparing items for the market.

This is my first time participating where I will be demonstrating tatting there.  Here are some of samples of tatting that I am bringing with me to the GTF.  I made a few of each and hopefully some will sell as well. 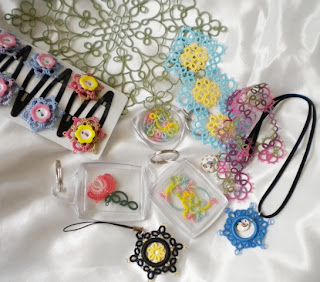 To my readers who are in the north of the country, please come see for yourselves what the other crafters have for sale at the market.  You may catch a bargain or two.

Email ThisBlogThis!Share to TwitterShare to FacebookShare to Pinterest
Tags ACG

The song Bare Necessities from Disney's Jungle Book kept playing in my mind when I was tatting this and I think it quite apt to be use as the post title when you see what I have tatted.
Nooo ... it is not a bear ....

This is Starlight Doily from A Tatter's Treasure Chest, sans picots.

If you have the book, you will notice that this doily has loads and loads of picots.  I don't fancy overloads of picots in my tatting, but the doily design looks appealing.

So .. Off with the picots - except the joining picots, off course. As usual, when long chains are involved, this piece needed blocking.
22 comments:

I did a 'Diane' and tatted MK's Spinning Wheel Glass Mat.  I can understand why Diane keeps going back to it.  It is an easy pattern to remember because the stitch count is the same between picots throughout. But I did make a few mistakes, especially with the row of three rings because I kept joining them up together.

Here is my (first?) Spinning Wheel Glass Mat,
With the balance of the HDT, I started on the 'Amusement Doily' by Celtess. The link will take you to the pattern. 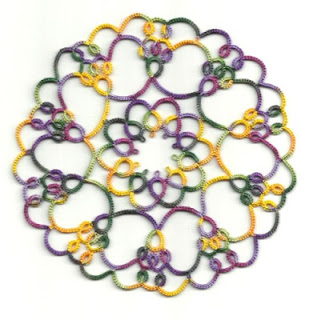 As you can see, it is not quite the doily as in the pattern.  I was running out of thread as I finished the 3rd round, so I made up the final round.  The actual 'Amusement Doily' is much more prettier than my aborted attempt.

Next is the update on the butterflies from  Adelheid Dangela's Tatted Butterflies that I started here and here.
The next one is Elise and my attempt to tat in one pass.
The butterfly on the left is the one attempted in one pass incorporating additional techniques of split ring, split chain and alligator join.  The one on the right is the second attempt with two rounds.  I had some problems tatting Elise - the pattern is charted but the section of the body of the butterfly did not show the stitch count.  I had to refer to other charts in the book for similar looking body and follow the stitch count from there.

This double-point hook is the work of 'im in the garage, who also produce the pop-a-bobbin shuttles, which you can see here in JaneEb's blog. Jane calls them Hooks with hats. I am so happy with what I received.

I am busy tatting for an event in June.  More about that in another post.
7 comments: