Slight Change in Round V

So, I have completed Round IV of JS Model 13 doily, It seems to lay out quite well right now. 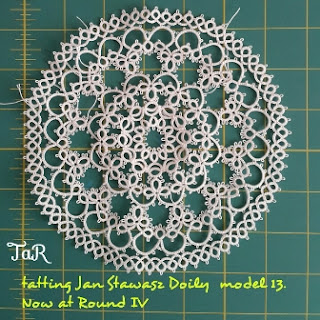 I was having slight difficulty in reading the stitch count for Round V because the numbers are rather small in some parts.  I had an idea to look at JS other patterns from his book because I noticed that he liked to repeat some of his motifs in different doily/mat designs.  True enough, the first six rounds of this doily is very like Doily IV on page 56 in his book Tatting Theory and Patterns.

I was also aware, from the discussion thread in Craftree, that there may be errors or misprints of the chart for Round V, so I was very cautious as I began to tat this, more so with my plan to reduce the number of free picots in some of the rings. But, I think I have figured it out. A marked difference are as pointed out by the red arrows in the photo below. 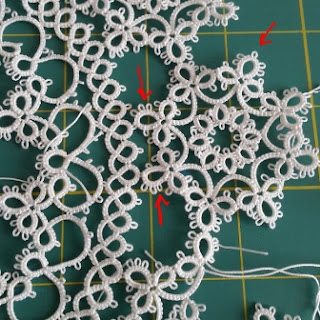 I made a slight change in the shape of the rings joined to Round IV.
My stand here is, any change done consistently throughout becomes a design variation. In this case, the change is too minimal to alter the big picture and that is how I will continue for this round.
7 comments:

But not without a slight hiccup just before the end.

So, as in the previous post, I started over Round 3 because I noticed a mistake right at the beginning of the round.  The re-worked round looks much better.

As it seems to happen often to me, I ran out of the shuttle thread real close to the end, 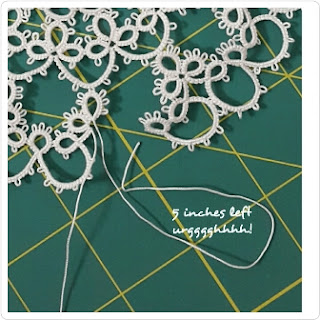 There was only 5 inches of thread left for two rings and two chains.  I could use the SLT at this point and continue tatting but it would distort the shape at the base of the trefoil. So, I loaded the shuttle and finished the round. 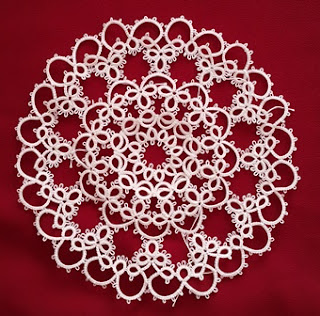 After so many years of tatting, I don't particularly pay special attention to the amount of thread needed for any project.  I just loaded the shuttles and start tatting.  For a large project such as this JS doily, you can't escape running out of shuttle/ball thread.

But, it does help a lot to know the different methods of adding new thread.  I think knowing the techniques of adding new thread is one of the basic skills that every tatter should know. There are many tutorials available online showing the various method.
I wrote a tutorial on the knotless method in my How-To page here,
Jane Eborall included one in her techniques page as well.
Karen Cabrera shared a video tutorial of another method of adding thread.

Tatting is suppose to be enjoyed and running out of thread is not going to spoil that for me.
6 comments:

Round 3 and 1st mistake made

I started on Round 3 of the Model 13 Doily and made my first mistake.

There was something wrong in the rings of Round 3 as I looked at them. I looked at the pattern a few times and was very sure they were all correct, until I noticed that the rings at the base of the trefoil has an additional picot and three extra doublestitches.
I could undo all the stitches if I want to, seeing that I am still at the beginning of the round, but I decided to cut it off and start anew.
Having lots of this particular thread is another convincing factor to cut off, :) 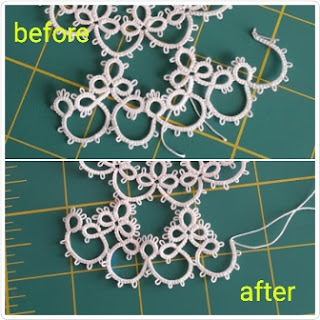 The 'after' looks much better to me.

I am not very fond of picots with a single ds in between.  Somehow the picots get squashed when I do it like that. That is why I have altered some of the rings to have two doublestitches between picots, while still keeping to the same total number of stitches in each element.
10 comments: