Planning for the end(s)

I have been wanting to tat butterflies from the book Tatted Butterflies by Adelheid Dangela for a long time now, and finally got around to doing it .  There are many techniques used in the book that I have not tried before, or maybe just tried once before like block tatting, onion rings, and even mignonette style. Then,  there is the butterfly that uses the leaf pattern as in Ruth Scharf style, the long twisted picot, and even a cluny butterfly.

I have only tried tatting a cluny once before and that was only learning the technique, not even trying to make anything from it. I have to search the net for tutorial on cluny when I reach that pattern in the book.

I will be making the butterflies in the sequence they appear in the book.  To start with are these three butterflies.
Alfa is the popular 4-rings butterfly which is the upper one of the two.  I modified it slightly by tatting a head for the butterfly with a SSSR which is also to tidy-up the ends, instead of tying a knot.  I also used the SSSR  to finish the ends at the head of Birte which means that I had changed the starting point when I tatted it.

I tatted the head for Celine as an onion ring, but I think I made the antennae rather short.  I had some problems with the chains in the upper wings because they overlap each other, on both wings.

Below is Diana, still a work on progress with only one side of the wings done.
The ring in the lower wing is not an onion ring but a chain tatted over a ring and joined back to the base of the ring.  To hold the chain in place, it is joined to the top of the ring, in this case, with a Catherine Wheel join. I made the antennae with long twisted picots.

One side of the wing is done first and ends by joining it to the body.  But, that would leave me with a problem of where to hide the two ends because there isn't a suitable place where I can sew then in.  I prefer to sew in the ends because the other methods don't seem to work for me, except for the SSSR where suitable.   In this case, I am going to undo that chain and do it up again as a split chain coming form the body and ending at the join at the top of the ring where I have more choices of places to hide the ends.

If you have managed to read this far, you will understand the title that I chose for this post. In summary, it is important to decide what you plan to do with the ends even before starting a project.  Study the pattern or picture or chart carefully before starting. If using the magic thread method of hiding ends, mark out on the pattern where the auxiliary threads are going to be placed. It can be at the beginning or the at the end of the work.

In the meantime, I also made another kilt pin with tatting attached to it. 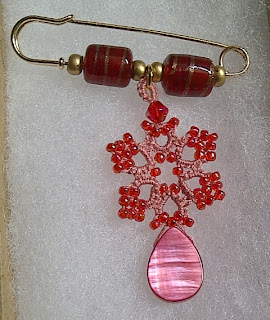 Email ThisBlogThis!Share to TwitterShare to FacebookShare to Pinterest
Tags butterflies

Last Saturday was a celebration of sorts for a group of crafters.  It is the 5th Anniversary of the formation of the yahoo group Needle n Crafts which was held at one of the member's house in Kajang.  Thank you Mel for hosting this year's anniversary meet.

As with the previous anniversaries, there were gift exchanges and door gifts given out.  It was a good opportunity for members who attended to show off their skills (as if there needs to be a reason).  It was set that all who participated in the gift exchange to bring a bird that is made from any kind of craft. And, I think you will agree from the look of the birds below, that they are a crafty lot, in a good meaning of the word. 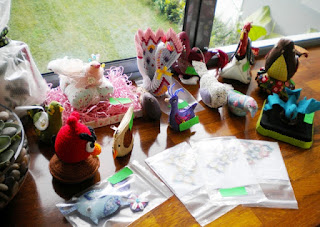 Even though I did not participate in the gift exchange, I too received a bird from Margaret. 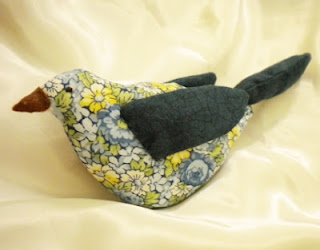 And, can you believe this, I was excited to see the plastic that the bird was wrapped in!  It got me thinking - they look like crochet but can the designs be tatted? 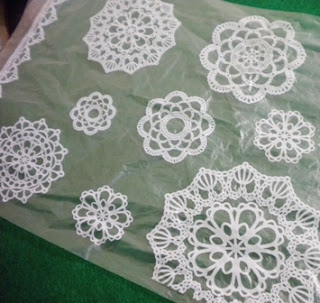 On my part my contribution for the door gifts are these,
They are bookmarks tatted from the Mary Konior's "Anniversary" pattern from the book Tatting with Visual Patterns.  I think the name is appropriate since we were celebrating an anniversary too. I also tatted a pair in 140 Country Grape Swirl but did not take a photo of them.

But, these are not all.  Mel, the gracious host, also gave out these to everyone,
It was like in craft heaven!
Thank you Mel for being a lovely host. Thank you everyone present for making it a wonderful morning.

And lastly, I wore this kilt pin brooch that day, which I made the night before. 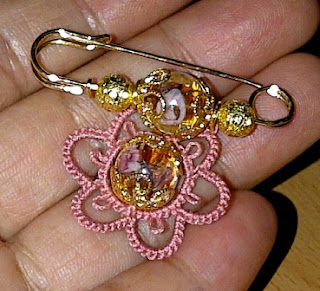