2017 has been a rather exciting year so far for me.  I got to travel twice, to Japan (as I had blogged about earlier) and then to Nordic countries during July. Photos of my Nordic travel will be in another post.

To top it up, my daughter was married in October.  Following are some photos of the event. 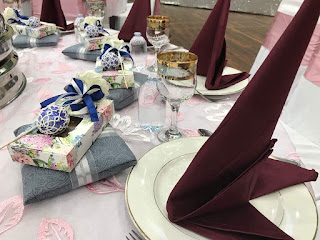 The 'bunga telur' is customary to have for weddings in Malaysia as a way of wishing a full wedded life for the couple blessed with many children. Literally translated, 'bunga telur' means 'flower (bunga) egg (telur)' or a flower with an egg attached to it.  Traditionally, hard-boiled eggs are used encased in netted pouches and attached to a flower stalk. The flowers are usually made of fabric/paper/plastic.

I decided to be different and asked a friend who makes soap to make some egg-shaped soaps.  These are the blue ones that you can see in the past photo above.  Instead of netting, I tatted the egg pouches used to hold the eggs. Well, what can you expect from a tatter!

It took me about seven months to that 150 pieces of the egg pouches. I tatted when I went to Japan, and when I was in Norway, Sweden and Finland. I only did the tatting pouches while the flowers, which are made of crepe paper, were ordered earlier because paper craft is beyond me.

All things done, it was a beautiful reception and everyone appears to be having a very good time.
18 comments: