I took a break from tatting to do other things. Specifically, I went for a week's holiday in Perth, Australia.
Here are some photos of my time spent in Perth and places around it.


Oh, also tasted the apple strudel touted as the best apple strudel in Australia. That went too fast, no one remembers to take a photo of it, he he he.

Back home, I continued with Round VI of the JS mammoth doily.  I had finished half-way of the round before the break.

I was so happy to come to the end of Round V.  So happy, in fact that I made a small mistake. I forgot to tat over tail of the thread at the beginning of the last motif.

It may seem strange that I have ends to hide at the beginning since I am using only white throughout hence I could easily start with CTM.

Okay, let me explain. Maybe someone may find this logical or useful.

I am using two shuttles and I am not measuring the thread for each motif of Round V.  I use whatever balance in the shuttle to continue for the next motif.
For each motif of Round V, I did start with a CTM every time but only at the first ring of the clover. I just pulled enough thread from one shuttle and finger-tatted the first ring. Then I added thread from the other shuttle for the next ring of the clover, tatting over the tail of the thread of the first ring. I should have tatted over the thread end of the second ring in the third ring, but I forgot to do that, and that end is only an inch long. 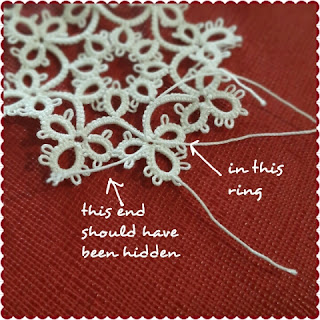 So, it is not technically a mistake but more of an inconvenience.  I almost always sew in my ends.  In this case, there was a lot of threading and re-threading of that one inch long thread to finish off this round.
Oh, I have to say that I have been good and sewing in the ends of the 12 motifs, doing it straightaway after each motif is done.

And here is the full photo as at Round V. 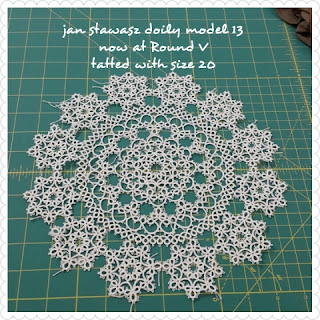