I have been quiet from this blog for a while, sorry..

I have to apologise to my blog readers for I have been neglecting my blog for sometime now.

There had been no crafting for about a month since we decided to re-paint the house.  There had been a lot of sorting and giving-away and throwing out of lots of stuff. Took the opportunity to turn the backroom into my workroom.  It is not a big room but sufficient to store my threads and place a couple of tables for my machines as well as a small cutting top.  The huge dining table will still be needed if I need to cut fabrics for making garments.  In the process fo sorting stuff, I put together all my tatting books in one place and realised that I don't have that many books. 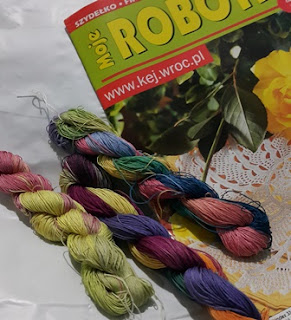 I started on a tatting project before the workers came to re-paint the house but put it aside for until all the work is completed.  However, it was brought out earlier than expected for a special group project. This is the motif that I started,
In the photo of the completed quilt were some of the other ladies and gent who contributed the other blocks.  There are others who were not in the picture who could not make it on the day this photo was taken.  Some of the blocks came all the way from Switzerland and the US.  This quilt was made for a special friend who had not been well.

That's it for the updates
Once again, apologies for not regularly updating this blog. However, you are all invited to my tatting page in Facebook, Tat-a-Renda, where I post snippets of what I am doing.
10 comments: