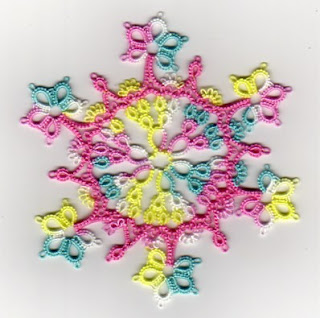 Here is the easter Egg Snowflake, one of Laura's beautiful design.

I am glad I made this. It forced me to tat the front-side tatting, which I think is the only way to do justice to this beautiful design. You can get the pattern here and the chart here.

I am not very comfortable with front-side/back-side tatting even though the effect is beautiful. I think it must be something to do with the picots not turning out so uniform when I tried it. Now, after completing this snowflake, it is quite easy really.

Thank you Laura, for sharing. I want to do the Victorian Heart next for an exchange.
6 comments:

While wondering what to do, I dig up my UFOs and came across the squares. Some square were already joined up as my intention was to make a bag. But this time round I decided to make it smaller. So, I unpicked the ones already joined and rearranged the squares and joined them up all over again. 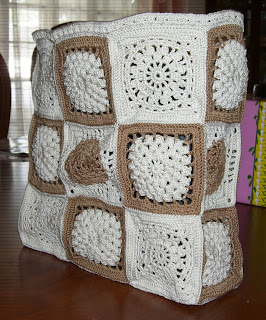 The bag appear standing because I placed a thick dictionary in it for the picture. 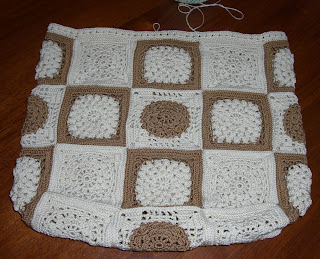 This is how it looks flattened.
It is still not finished. I am crochetting a few more rows at the top for a heading. Then there is the handle/strap/sling or whatever that I have to make ... as soon as I can figure out how to do it. I might also consider putting in a hard plastic or cardboard for the base to keep the boxed shape of the bag.

After this, I'll have to start on the Pay it Forward gifts .....

Update - 29 March 2008
I finished the bag today. Here is a picture of it hanging from the front door latch ... for want of a better place, :-) Nobody was around to hold it up for the shoot.. 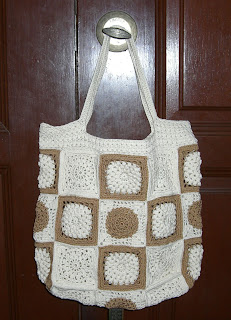 During the past few weeks I have been going over some of my earlier designs. working with the draft of the pattern instructions. I was testing to make sure that the instructions are correct, and can be easily understood and followed.

But I have this problem - each time I re-do a design I will end up tweaking the old design, trying to make each one look better than the earlier version. Like these, for examples. The ones in white are the first version. 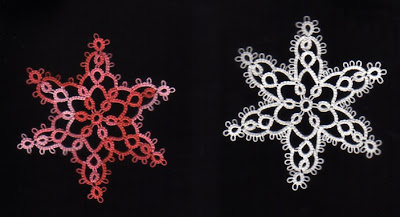 Now, I am not sure which ones look better.

Another remake is this small mat made up by joining up six motifs. The original design is the one on the left. I tried it again in two colours. I like the new one better. Notice that I have changed the curve of the chains in the 2-colour version. 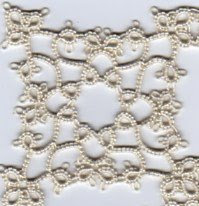 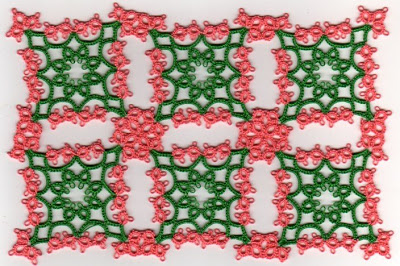 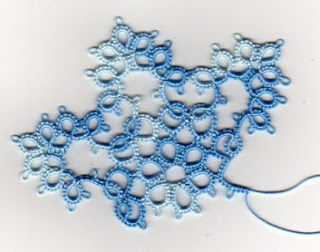 Some doesn't work our so well like this one on the right. In the first version, the group of rings that form the points of the snowflake are not joined together. I thought joining them up will make the design hold up firmer. But the design is beginning to skew (to the left, in this picture). Not giving up on this yet, even if there is a lot of unpicking to do - or just cut and begin again.


And, along the way, I came up with a couple of new ones.