A look at an Old Tatting pattern

This is a scan of an insertion from The Pearl Tatting Book by Mlle Riego.

I took a look at it and thought - this is an easy one to try. Don't have to read the instructions in detail - make the first row, turn and make the opposite side, joining the rings at the centre. But then, I decided to follow exactly as the pattern was written and I made an interesting discovery on how the rings are joined.

But the instruction say to make the first row without any joining of rings. The rings are only joined in the second row. 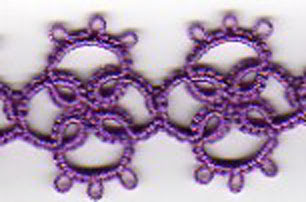 What is interesting about the join is that the picots cross over each other to make the join, with one picot going through the other. I hope it can be seen clearly in this enlarged scan. There is no gap or hole in the centre where the join is made - as what you'd usually get when several joins are made to one picot.

The pattern stated to use cotton No. 60 but I made this using a size 40. Even then I was struggling with the tiny ring in the middle which is (2-2), :-).
And I cheated a bit - I used a split ring to turn whereas the instructions say to cut after the first row and rejoin the thread to the tiny ring to begin the second row ... he .....he ....
5 comments:

The NNC group celebrated the first anniversary beginning of the month. We had a small (but very noisy) party and brought along some stitching gifts to be entered in an exchange draw.

I picked these items made by Janet in the draw, a patchwork wall-hanging and crochet coasters. Janet does wonderful patchwork and quilting, something that I have not tried before and don't think I will any time soon. Thank you Janet for the lovely pieces. 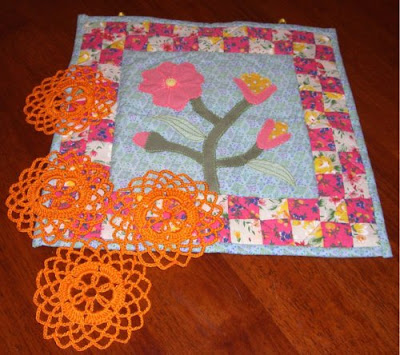 My contribution to the draw were these - three small doilies and a pin-cushion. The doilies are crocheted with size 20 thread, and the pincushion is tatted with Olympus Gold #40. The person who got my gifts is Mel, who had asked me to make the snowflakes in my earlier post. 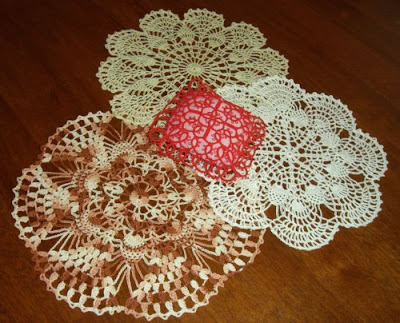 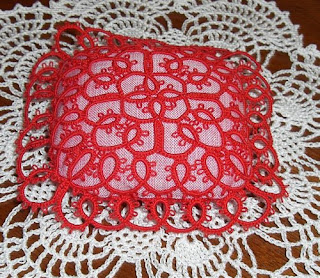 This is a close-up of the pincushion. The pattern is adapted from the book A New Approach to Tatting. The originally pattern is for a potpourri pouch, but I made a mistake somewhere and by the time I realised it, I don't feel like starting over. The only way out that I can see is to turn it into into a pincushion. I think I like the pincushion better, :-)


Here are a few other smalls I received. A beautitful cross-stitch hanging ornament form MW. A pretty and practical flower pincushion from June - it can be tied to the wrist. Two lovely crochet bookmarks from Usha, and another pin cushion from Nik. 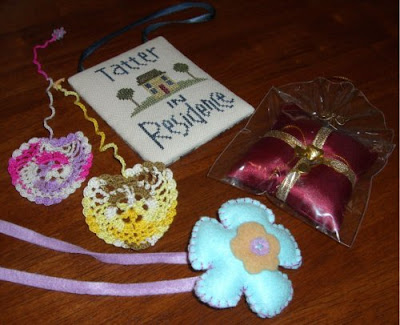 A big thank you to everyone for a wonderful afternoon and especially to Nik for being such a gracious host.