and I have not fnished my Renulek's Spring 2015 Doily. Here is a report of my progress so far.

After having issues with the small flowers, as in the last post, I snipped off that round and started over and the result is much better. Rounds 6 and 7 went smoothly. 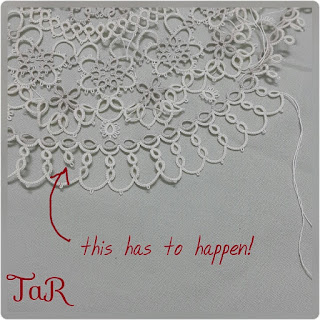 Opened up the group of rings and chains and re-tatted - took me two days, in between doing other things. Now, this is what I learned from this episode.
If your first thought was to snip the mistake off, do it immediately. Don't even think about opening the stitches because if you do, you will have to do them all. Once you start un-doing even one ring, you'll keep telling yourself "I'll do one more", and by the time you decided that cutting off is the better option, there will be only a couple more left to do. By then you'll be thinking, might as well do them all! Have you had that feeling before?

Anyway, here is it is after Round 9, which was without any mistakes, Yippeee! 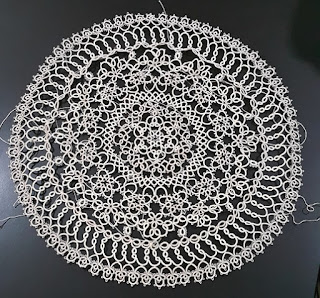 This doily will definitely need blocking when done. Notice how the rings in Round 8 have a slant in them.

Now, I tried something slightly different for Round 10, which you can see here, 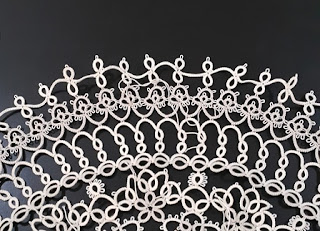 I decided to alternate the curve of the chains between the rings. Not sure of the end result but I think it will turn out okay.

and next, the happy-dance news.
Remember this post about my yard sale find? When I was at the yard sale, the homeowner mentioned that she came across a few shuttles while sorting out her late mother's things but can't find them. She promised to call me when she comes across them again. I was not placing mcuh hope that she'd remember.

True to her words, she called me last week to tell me that the shuttles are found and would I like to come and pick them up? Would I? Would I? That needs no answer.

I picked up them up the next day and was grinning ear-to-ear when I saw the shuttles. Wouldn't you too, when you see these? 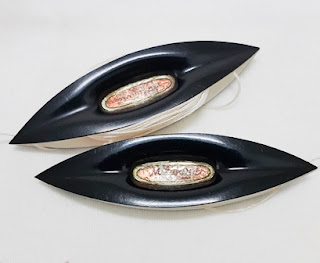 Now I have three of them.  The first was my mother-in-law's that surfaced during packing when she had to move house. Growing up, I learned tatting using this type of shuttles but that was more than 40 yearas ago and have lost them somewhere.
17 comments: