The IOLI Convention are calling for Tatters

This 56th Annual Convention will be held on July 25th to August 1st this year in Los Angeles California. You can read all about the convention from the Freeway Lace Guild site, who are the host this year.

No, I am not attending this convention, though I wish I could. But I will be there, not in body but in spirit.

This years theme is Golden Nuggets of Lace. And to celebrate this theme, the Convention needs flowers, lots of flowers. And they wil be using the August Birthday Flower of the Month from the 2008 year's fundraiser, Flowers of Lace Put a Smile on Your Face.

And guess who designed the August Birthday Flower .... Me! 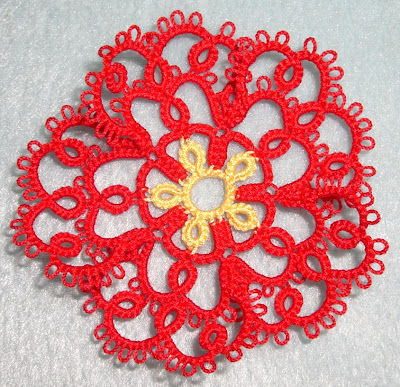 Please go to the online tatting class site to read more about it and to get the pattern of the flower. There is also a link there if you want to order the book, Flowers of Lace Put a Smile on Your Face. There are many other lovely flower patterns in there for each month of the year.

This is my gift for all mothers and children of mothers around the world. 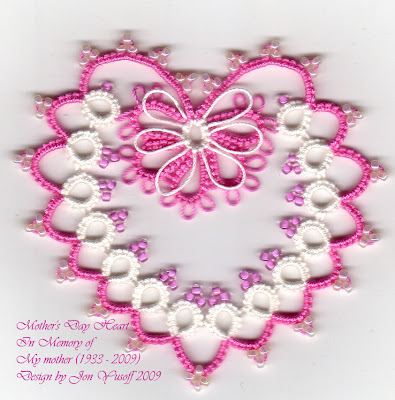 You may find the pattern for this heart in here.
Happy Mother's Day 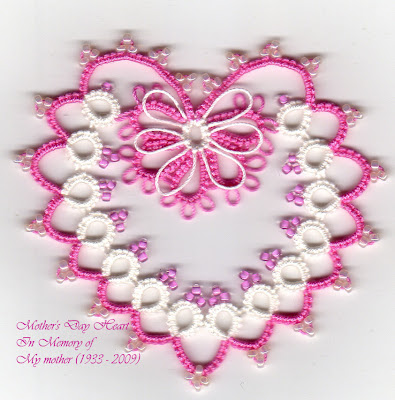 Celebrating Mother's Day this weekend, I am sharing you a heart pattern that I have created sometime back. Initially I wanted to design a new one but I realised that I may not be able to complete it in time for today.

I have been reading a number of posts in InTatters about the daisy picot rings. I recalled that there was a heart that I designed with daisy picot rings in it and that I have not written the pattern for it. This will be a good opportunity to have the design documented.


This is the chart for the heart. 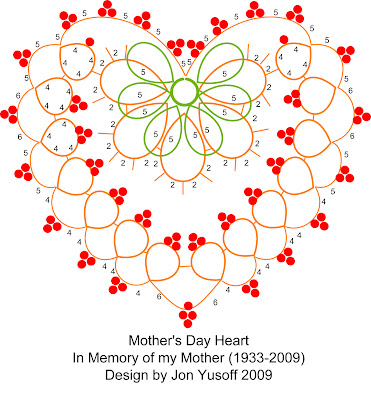 Some notes about the chart and written pattern -
Load two shuttles with a different colour in each shuttle, and matching coloured beads On Shuttle 1 (white thread), string with 39 beads. String 63 beads on Shuttle 2 (pink thread).

(*)Switch shuttle (SS) and make the next set of stitches (1lp1).
SS, make the second ring of the daisy picot with the following stitch count (5+2-2-2-2-5). Join this ring at the first picot to the last picot of the previous daisy ring. The join is made as you would make a join on the unflipped side of a split ring.

Repeat from (*) until there are five rings (in pink) altogether in the daisy picot, and five long picots, (in white).

Finish with the last two ds with a long picot in between), (1lp1).

Arrange the long picots so that they are lying on top of the pink daisy ring. Close the ring by pulling the thread of Shuttle 1.

Reverse work for the next part of the heart. Make a SLT before starting to switch the position of the thread.

Repeat the other side of the heart in reverse sequence. Cut thread and tie to the beginning and hide ends.

If you wish to use different coloured beads for the rings and the chains, like I did in the picture, string the beads for Shuttle 1 as follows -
First string 19 beads to the thread of Shuttle 1. Then add one bead that you are going to use for the chain followed by another 19 beads of the previous colour.

I have tried to explain the pattern in writing as clearly as possible. Please e-mail me if you need further help with this pattern.

Addendum (sort of)
I have this feeling that I may have confused some of you with the instructions for the daisy heart centre. Here is an enlarged diagram of the centre with the ammended stitch count. 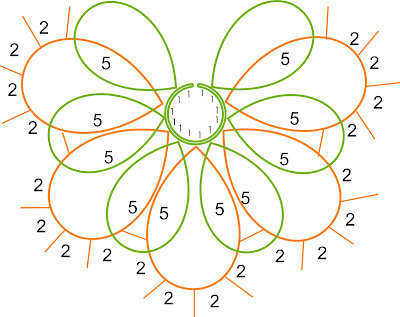 With the core thread still round the fingers, switch to shuttle 2.
Make unflipped double stitches, (5-2-2-2-2-5) with Sh2 on the core thread. I will call this the first petal of the daisy picot.

Then, pull the thread of Sh 1 to close the ring. Make sure you arrange the long picots properly before closing the ring so that they are positioned on top of the daisy petals.
29 comments:

The weather is not good for tatting

Besides working on completing the tiny hearts, have not been able to tat much otherwise. The weather is not very kind to me.

It has been rather hot the past week. Not blistering hot but very humid and sweaty. I feel like taking a shower every few hours. I can't tat in this high humidity weather. My hands are always damp with sweat and that is bad for the thread. They don't slide easily when wet or damp.

But you can't stop a tatter from tatting, ;-) In between the showers and frequent washing of hands to get rid of the sweaty palms, I managed to finish these. 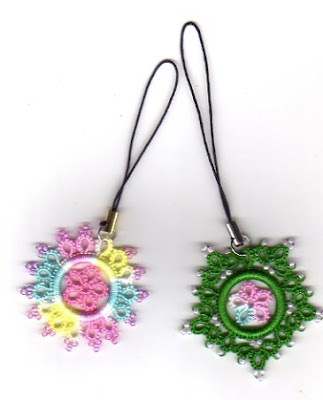 I think I'll call them 'phone-dangles' because I often see things like this, not done in tatting though, hanging from mobile/cell phones. But they can also be put on zipper pulls on purses or bags, or anywhere for that matter. Anywhere that can catch the eye.

Hopefully, whoever notice it will be curious enough to ask about it and I can start telling them about tatting. :-)
13 comments: