Rachael, in Phoenix Arizona entered some tatting in a State fair and won a whole lot of ribbons for her entries. She shared photos of her win in In Tatters.  When I saw the photos, I was smiling to my self and felt good inside.  Why?, you asked.

Her blue ribbon was for the Magic Moments Snowflakes .... and the pattern is from me ... whooeeee.  All I can say is that her tatting is impeccable and deserves all the win. Rachael gave me permission to share some of her photos here in my blog.  There are several more photos of her other entries which you can view in In Tatters.


The pattern for the snowflake is here.

Rachael won second place for several bookmarks, and she has tatted a couple of my designs as well, the Foldover Bookmark (which are at the back of the group). 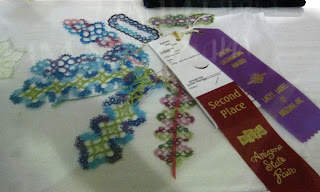 I must say her version of the basket edge variations (front) are really pretty.


Thank you Rachael for choosing my patterns.  I felt like I had won too.
3 comments:

My daughter returned from the UK and brought me these, 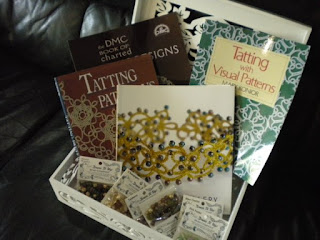 Well, okay ... so I told her what to get. Still, to be able to flip through the pages ...  aahhh,  such inspirations.
(Okay, it doesn't take much to please me, LOL)
I now have three of Mary Konior's tatting books.  I hope to be able to get the fourth, Tatting in Lace, some day. I may have to splurge a bit to get that book, since it is becoming rarer and rarer to find now.

I mentioned  that I want to try making cards with tatting embellishments, and she got me these books on cardmaking.  Oops! forgot to remove the price tag before snapping the picture.  But, at that price ... what a deal!

And  glass beads in a mix of shades and size and shapes.  I need to plan carefully on how to used these beads to get the most out of them.
12 comments:

Reading about the ravaging of Hastings Pier by fire a few days back brought a lot memories of the time when I was in Hastings & St. Leonards.  I look into my old albums of pictures of the pier taken when I was there and only found a few, how sad.
The pier was built in 1869 and opened to the public in 1872.  I should say it has passed its prime when I was there.  You can read a bit more about Hastings Pier here and view postcards pictures of its heydays.

I remember walking out to sea the length of the pier feeling the cool breeze blowing, and hear the waves breaking beneath against its support pillars.  There were small shops selling souvenirs and offering penny slot machine games when you reach towards the middle.  I never did get to the very end of the pier, all 275m out to sea.  Now, I recall the smell of freshly made doughnuts and the taste of the ice cream .... ahh  memories!

Please excuse the grainy photos.  There were none of the digital thingamajig in those days, after all it was taken over 34 years ago.  Yes, that was how long ago that I was in Hastings as a student in the Hastings College of Further Education studying for my A-levels.  I have visited it again twice since then.

I hope the people concerned can restore the Pier but it would be hard to imagine it being possible considering almost 95% of it was destroyed by the fire.
6 comments:

Bringing your attention to this blog post that I wrote in April this year.  It was about my reaction to a certain type of multi-coloured thread that was giving me (and a few others) a headache just looking at it.

The thread in question is Lizbeth Jewels #113.

I was looking at it again the past few days and decided on another attempt with it.  This time I was a little wiser and decided on a pattern with a simple layout.  I made a bookmark using a pattern that was published in Jane Eborall's blog.

The result is very much better than the one in the earlier blog post.

I did make a point to study the colour changes in the thread before deciding where to start, and the the overall effect turned out quite a surprise in a nice way.

This is also the first time that I used the single-shuttle split ring (SSSR) to hide my ends.    Using the SSSR, I tat over the tail of one thread for the first part of the SSSR.  The other end was hidden inside the second side of the SSSR as I close the ring.

I find it a neat way to finish off the ends and may be using it more often in the future.
8 comments: