I wrote earlier about finding old tatting when cleaning up my MIL's house. Now I have unearthed some crochet edgings and an unfinished doily. 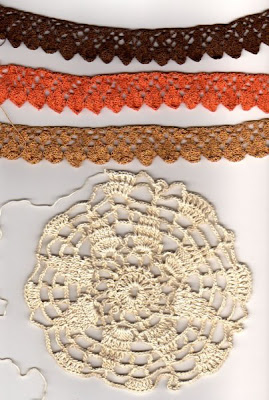 There are altogether seven strips of the brown edging, one strip of the salmon/orange and one of the dark brown. Like the tatting shown earlier the edgings were all made with Coats cotton in size 20. As for the unfinished doily, I am not sure what thread was used but it is much thicker than the edging.

Am not sure what I can do with them.
No comments:

I started this blog for the purpose of the 25 motif challenge, hence the word 'tatting' in the original name. But I do other thread-related crafts as well, so I decided to expand this blog to talk about other things that I do sometimes that relate to working with threads and yarns. To reflect this, I have decided to change the name of the blog - but the URL link is still the same.

(This may not be the final layout - I am still toying with other ideas, so you may get see some changes to it later)

And for starters, currently I am working on a crochet tablecloth for my big dining table. This is going to be long project. After doing some calculations, this tablecloth will take me about 5 months to complete at the rate I am going now. Here is what I have completed so far. 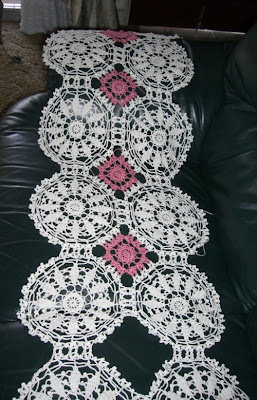 Progress pics will be shown from time to time. And to see how far I've done, there is a progress chart in the sidebar.
3 comments:

Look what turned up when my daughter was clearing up her grandmother's (my MIL) old things. It was while she was helping her grandma to pack up all the things at the house because they had to move, lock stock and barrel. The land where the house is on right now has been acquired by the government for roadwork project.

Among the many things that she sorted through, she came across three very old tatting edgings. Two were completed while the third was in progress with the shuttle and ball still attached. Looking at the torn label on the ball, I can barely figured out that the thread is Coats mercerised crochet cotton in size 20. And the shuttle must be an old clover because I remember using something like it a long time ago when I first started tatting. That was over 35 years ago and I am guessing that these pieces are almost that old. 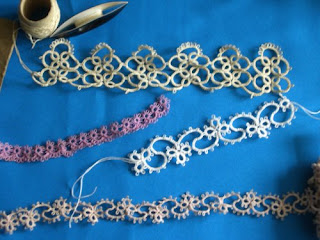 I found the clover edging (at the bottom) very simple yet interesting. I made a small portion of the design by counting the ds on the old one. I don't know how it was made originally but I did it with two shuttles. Mine is the larger one in the middle. The unfinished one right at the top looks familiar - I might have seen it on some tatting site somewhere.

Along with the tatting there is another interesting find - not tatting though. It is something that my MIL made to give away to guests at the wedding reception when I married her son. Just to let you all know, my MIL is very good at crafts and she particularly like to make flowers out of all kind of material - fabric, straws, beads, etc. Traditionally, in the custom of the Malays, guests are given hard-boiled eggs placed in decorative containers. And in this case, she made them in the shape of armchairs with padded cushion with the egg nestled in it. What do you think of this? 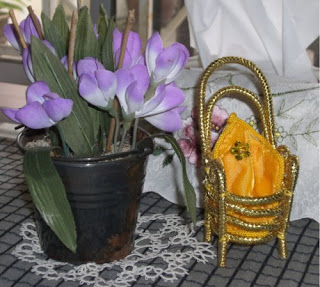 The frame of the armchair was made using cording with pliable wires in it. I remember watching her making it during the preparation for the wedding.
7 comments: