Snowflake for the Season - Featherline 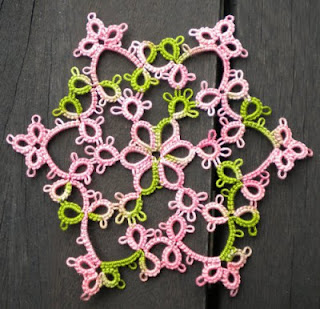 If you have a copy of my book, Tatted Snowflakes Collection, you'll recognise that the centre is based on the Floret motif from the book. 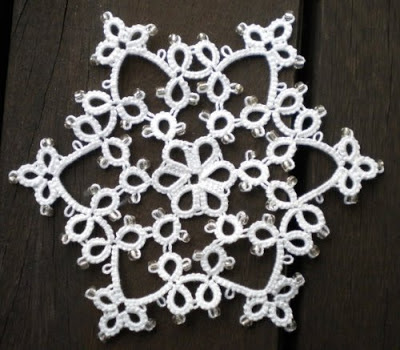 This second one has beads added to it.  I also changed the stitch count a bit here and removed some picots.  This model is tatted with Hakelgarn Online, #20. 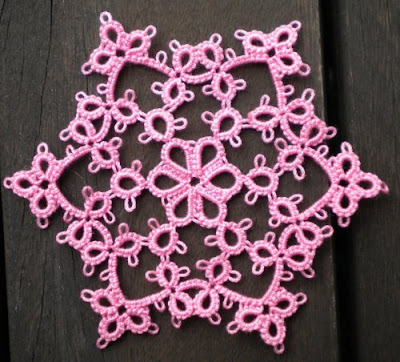 This third version is using Olympus 40.  This is the version that I am finally satisfied with.


This ia my seasonal snowflakes offering for this year.  I am calling this Featherline.  It is a word that I just made up.  The design is kinda wispy to me, hence the word feather is used in it.  The pattern is now available in Jon's Patterns Page. 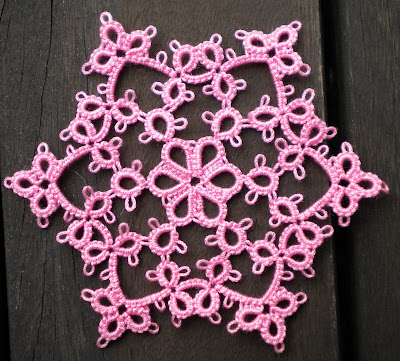 Model is tatted with Olympus 40 and measures 7.5cm across point-to-point. 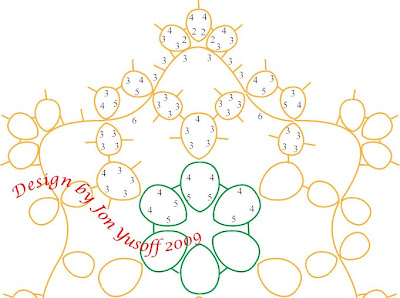 Round 1
This round is made entirely of SCMRs with floating ring with each SCMR. CLick on the link for a tutorial on SCMRs.  The SCMRs are shown in green in the chart.  For this snowflake, I use the GR-8 Brothers method of making the SCMRs.

Make a SLT with the two shuttle threads.

Repeat from (*) four times.  The last SCMR is joined on both sides, to the previous SCMR and to the first SCMR.  Cut thread, tie and hide ends.

SS and repeat from (*) to complete.

I was lucky to receive some heavenly HDTs in the last few days.


The first one is this Pink Rose that I received from Zarina.   Zarina offered a selection of her HDTs to be tested and I jumped right in with my choice. 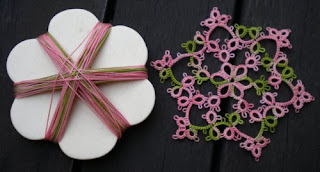 This is the same thread that TattingChic blogged about earlier.  This thread is size 20.  I was so excited to receive this thread that I immediately open it up and tatted up this snowflake.  It was wonderful to tat with.  I like how the snowflake tatted up with the sprinkling of green over the pink.


The second delivery was even more heavenly.  These were from Pamela, Tatskool.  Pamela and I, we had an arrangement between us.  When I was working on the book, Tatting With Rings, I send a file of the draft for Pamela to give her once over.  I was elated when Pamela suggested a swap, my book for her threads, even before she knew the price for the book.  This is an opportunity that I was not going to let pass.


I never actually say how many of Pamela's HDT that I wanted, but was surprised to received these!!! 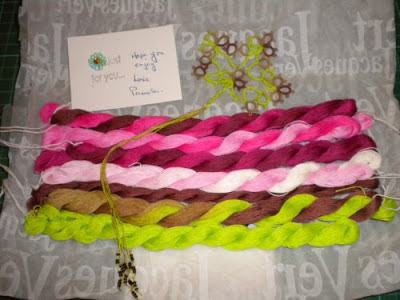 Email ThisBlogThis!Share to TwitterShare to FacebookShare to Pinterest
Tags gifts, tools of the trade

I can't believe that it is almost a month ago that I last wrote anything here. It had been a busy month and me getting sick in the middle of it did not help either.  Still, after a month, there is nothing much to show because I had not done any tatting during that period.  So, just to let you know that I am still around I am sharing with you my shuttles collection.
I don't have many and none of them are collectors item, so to speak. 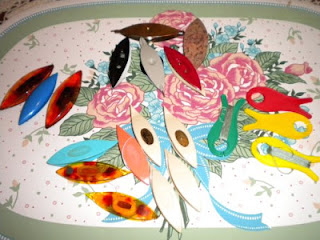 Here they are altogether. 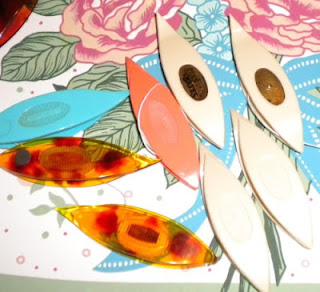 My workhorse are the Clovers and Susan Bates.  I can tat fast with these shuttles.  They are just the right size to hold.  I have many more clovers in all the different colours but only four of them are shown here. 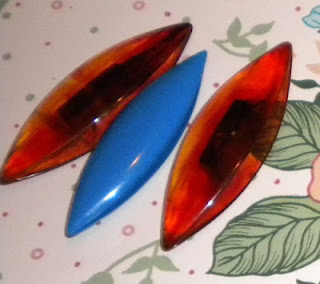 These three are Inox shuttles.  I like tatting with the two brown ones but I don't use them often because they don't have picks on them.  I find the pick come in handy if I need to unpick the stitches. They are slightly bigger than the Clovers and also heavier but the surface is so smooth that the thread just slides across.  BTW, I use the sliding motion when tatting.  These are the ones that I had to do surgery on. See Fox's blog to know what I mean. The blue one in the middle is the worst shuttle that I have tried tatting with.  It doesn't hold much thread and practically splits if there are too much thread wound in it.  And it doesn't seem to want to stay put in my hand - always slipping off. 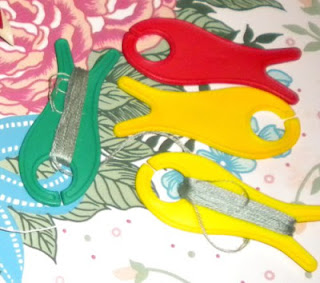 These flat shuttles come in handy for projects requiring only a small amount of thread to be on the shuttle. 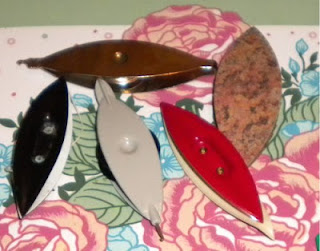 These are for keepsakes.  The black on the left is a Milward that I got form my MIL.  She was moving house and it surface during the packing. I wrote about in my blog here. Next to it is an Aero shuttle and the red one with a pick is a plastic Clover, if I go by the label that is on it.  Both were given to me as gifts.  The one on the right is a Georgia Seitz shuttle and the metal shuttle is a DMC shuttle.
5 comments: