This item started as a decorative cover for a jar, in this case an empty jam jar, using a couple of designs that I had made separately before.


I started with a round centre motif, one the designs in my 25-motif challenge. Then I added two rows of rings and chains, but done so that it forms a round upright shape. The next round is a round edging that form a bit of ruffles. After I have finished it, I string a strip of lace in the space between the upright rings-and-chains.
This would be nice to decorate any home-made jam or pickle jars to give away.
It can be a container for a potpourri or scented bath soaps.
Or, you can fold the two rounds of ring-and-chains over each other and it will turn into saucer-shape or shallow bowl, which is something like this. String the lace through the two folded rings together and it can be a coaster for a small glass or a candle stand.

You can also add a tiny cushion in the centre and turn this into a pin-cushion or maybe a ring pillow for a wedding. Sorry, I don't have pictures for these because I don't have the material to make the cushion. Or used on its own it can be a doll's hat.

Thank you for all your comments. The finished piece fits over a jam jar with lid that measures 2.5 inches or 6.5 cm across, using size 20 thread.

Updated: The pattern for this coaster/jar cover/candle base is available here.

Email ThisBlogThis!Share to TwitterShare to FacebookShare to Pinterest
Tags edging, patterns, rounds and other motifs

The Blue Doily .... is moving along..slowly

The sixth round of the blue doily is moving along ... at a rather slower pace than I had thought earlier. I had been sidetracked into doing some other tatting stuff as well. To compound it, I had to unpick this 6th round a couple of times, and they are all split rings, uugghh!
Unpick no. 1 is because I made the mistake of leaving a slight gap between the split rings and chain. Don't know what made me did it that way but after a few rings made, I just didn't like how it turned out.
Unpick no 2 is because the picots joining the rings , especially the outermost rings are a tad large, and I have a feeling that if I continue on, it will ruffle up.
But I am happy with how it is looking now. The loose thread are ends that I have not tidied up yet. I don't normally hide the ends straightaway for a WIP. 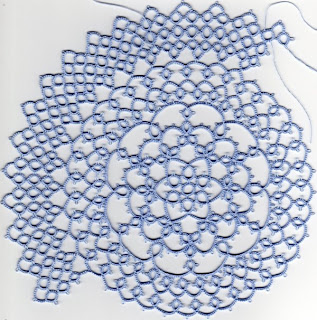 I received a request from Nivedita for the pattern for this doily. To tell the truth, I don't have the complete pattern for this yet. I thought it out as I move along. Not even sure how the 7th round will be done, though I have some idea already. Or how many rounds it is goind to end up with. It may take a while, or... it can be a tat-along emm, that's an idea.....
1 comment:

I completed one of my WIPs - another remake of an earlier entry to the challenge, the
mignonette style doily. I was not very happy with the first one because the outermost round scrunched up and did not lie flat.

The centre is made of a group of daisies, followed by three rounds of rings joined the mignonette style. Picking up the centre motif, I made a string of daisies for the final round. The thread is manuela variegated in size 20.

This second attempt was modified so that I can truly say that it is can totally be made with one shuttle. And I really did use one shuttle for the centre cluster of daisies. .... But cheated on the last round when I think of how many ends I had to finish, :-D. I actually used two shuttles for the last round, to make the split rings to go to the next daisy.
Still working on writing up the pattern for the motifs of the challenge. What's taking so long is drawing up the charts. I only manage to complete one a day for the simple round motifs. Don't know how long it will take when I start work on the more detailed designs.
3 comments:

It's Windy Outside - Let's Fly Kites

Ruth said it is usually windy in the month of March, and asked for some kites for the calendar.

I have made mine. The pattern is in the Tatting Pattern Calendar for March 16th. 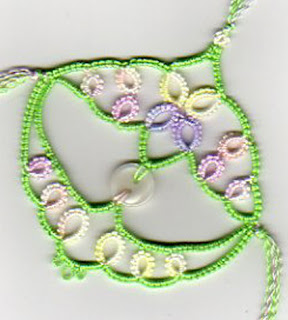 Besides that I am still working on the edging and the blue doily. The edging (for a tablecloth) turned out to be not so smooth-sailing as I had hoped. Like I said earlier, I only wanted the corners so I modified the pattern a bit (taken from the Priscilla Tatting Book 2). I had to undo one of the rows a couple of times because of some miscalculation at the start of the row. I think it is going to work now, I only have one more row to finish the first of the corners.

WIPs - update on another doily 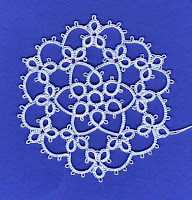 Here is the update on another doily that I have started on, which was mentioned in one of my earlier posts. Just to refresh, here is the pic again (right).


I have added another three rounds to it and the doily has expanded to just over 6 inches in diameter. I am making the next round with a series of split rings and I think that round is going to take a bit longer to finish. 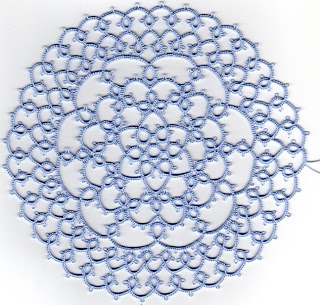 I have also started on a new project, this time an edging. The pattern in from one of the antique pattern book, from Priscilla Book 2 (I think). I am not making it into a full edging, but only at the four corners, which I will then applique to a tablecloth. I had to make some changes to the pattern to take this into account. This one is also going to another present for someone. Pictures of that will be in the next update.
3 comments:

I have completed the doily that I started with the motif 19/25 that I posted in the challenge earlier. I started towards the end of December and finally finished it a few days ago. The full size measures 15inches or 38cm square, made in size 20 Manuela multicolour in shades of yellow, lavendar and pink. You can' really see it in the picture. This doily will be given away as present, to whom or for what occassion I will not say right now, until after the event. I hope the persson who will receive it will like it.
3 comments:

One for March Calendar

First of all I want to say that I am not Irish - but the March pattern has an Irish theme, with shamrocks and St. Patrick and all that. Would you believe that I looked up the dictionary to find out what the shamrock looks like. I want to make sure that I got the shape right. And I gave it a try - and came up with this shamrock. So, if you are thinking that the green is not quite the right Irish colour, you know why. 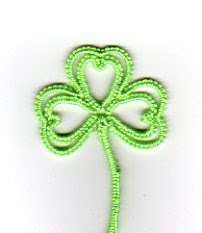 The pattern for this is on March 4th of the Tatting Calendar. Thank you Ruth.
1 comment: