I had a three-some tatting session with Zarina and Diyanna last Saturday. As usual, we chat a lot and tat a bit.  Zarina worked on a Rita Weiss doily which you can see in her blog from the link.  Diyanna wanted to be refreshed on how to add the tiny motif in the centre of a ring as in my Tatting With Rings patterns.  I was working on my snowflakes models.  Nobody remembered to take any photos so I don't have anything to show on what we tat.

During the meeting, I got off Diyanna a couple of early tatting booklets.  One is a DMC publication published in 1965 and the other is a J & P Coats Book #469 published in 1962. 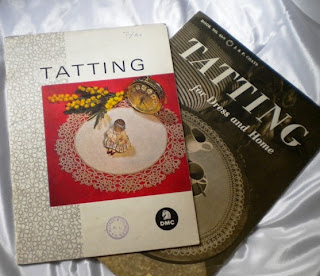 Inside the Coats booklet is a leaflet with a pattern for tatted doily or trolley cloth published in 1967. 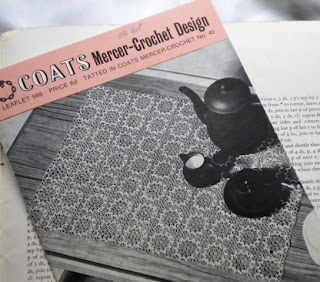 I seems to have an incline for old tatting patterns lately.  Late last year, I had a swap with PattyD for a workbasket magazine.  Patty was asking for threads and I was attracted by the issue date of the magazine. 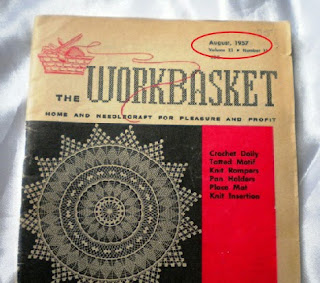 Here it is enlarged so you can see it better, 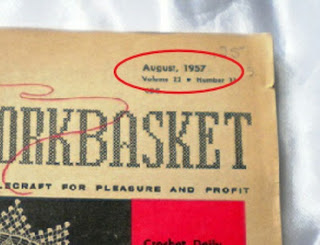 Imagine that, this workbasket magazine is as old as I am, up to the month!  Well, I almost did not get it because someone has asked for it before me.  But, after I pleaded my case, she agreed to let it go for me.  Thank you, Soyquelesoy.  Tatters make the "bestest" of friends, he he he...
I checked the definition of 'vintage' in the Oxford online Dictionary and this is what I found,
Vintage - denoting something from the past of high quality, especially something representing the best of its kind
Hmm .... I wonder ... I guess at this time I am plain 'old' and will never be of vintage category.
6 comments:

How to add New Thread Without Tying a Knot

This is an explanation on how to add new thread when the thread in your shuttle (or ball) has run out. 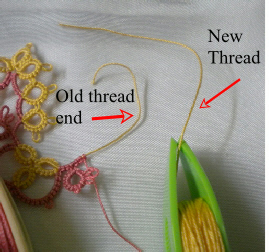 Make the first half-knot for the ring but do not slide it right up to the beginning.  Instead, after flipping it, keep it loose and pass the old thread end through the loop.  Make sure that the end passes through the loop in the same direction as the shuttle thread.  Then, hold the shuttle thread and the old thread end together and slide the half-knot to the beginning of the ring. 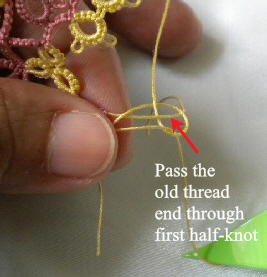 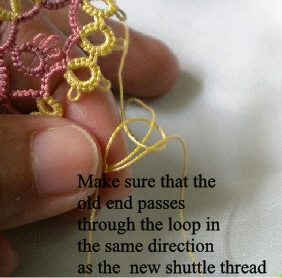 Make a few more doublestitches in the same way, passing the old thread end through the loop at each half-knot.  This is sometimes described at tatting over tails, i.e. the doublestitches are tatted over the thread ends. 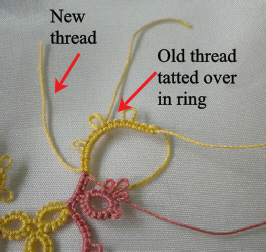 Right, we still have one other end to deal with, i.e. the end of the new thread.  The same treatment is done for the new thread end, i.e. tatting over it in the next element which can be either another ring, or in a chain. 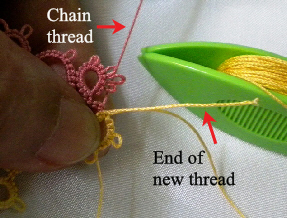 In the piece that I am making here, my next element happens to be a chain. If the chain has only a few doublestitches, say only four or five, followed by a ring, I will continue tatting over the ends into the following ring. 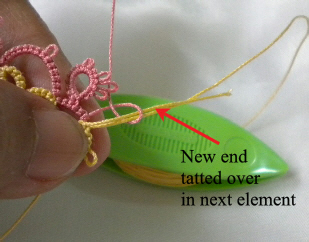 I usually leave the ends in the piece and not cut the excess thread immediately, in case I make a mistake and need to undo it.  That way, I still have enough length of the old thread to work with.
Another suggestion is to block the piece first and then cut off the excess thread.  Normally, tatting thread will shrink a bit when the piece is moistened for blocking.  This shrinkage will further tighten the doublestitches over the thread ends and secure it further.
10 comments:

Email ThisBlogThis!Share to TwitterShare to FacebookShare to Pinterest
Tags tutorial 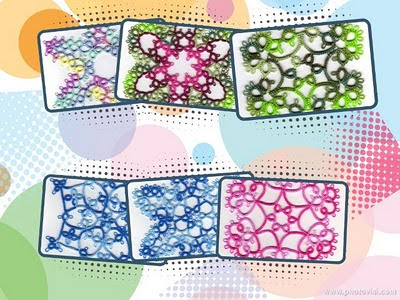 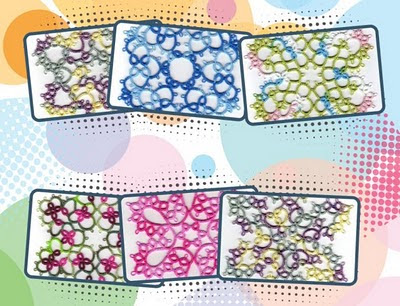 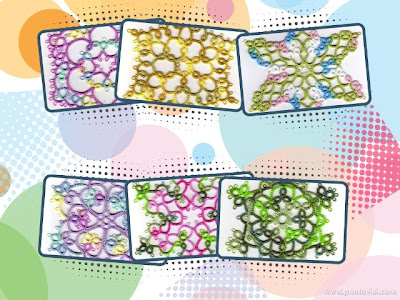 p.s.  I am in the process of preparing the charts and writing out the patterns for these designs which will be published in a new book.  As far as I am aware, these are my original designs.
13 comments:

Poll - Are you a Tatter?

I am interested in finding out the profile of readers that come over to my blog. I have created a simple poll for this and it is in the sidebar on the right.

Please leave your mark in the poll by clicking the button that closest describes you.
I appreciate your participation. Thank you.

p.s. I had not showed any pieces of tatting in my last few posts. I have been tatting but I am not ready to show any yet. They will come soon, :)
11 comments:

It is good to be back

I arrived home from my trip on 26th, a little after 5.00pm. The whole journey back took about 17 hours, including a 4-hr transit in Dubai. Most of the flying time was at night but I did not really manage to get much sleep during the flight. The difference in the clock time was playing havoc to my body, too. On the day I arrived I did not fall asleep until about 4.00 in the morning.

Ahh ... this body is not what it used to be. When I was working, I had travelled to Europe and the UK a few times but still manage to go to work the next morning after arriving home.

We stayed at two places during the trip, in Leicester first and then in Croydon. All the days were quite full. From Leicester, we drove north as far as Leeds and west to Manchester. From Croydon we went to Swindon and further southwest to Somerset. Each day, setting off at about 8.30am and arriving back to the hotel at 6.00pm. If the daylight hours were longer we would have travelled to more places, I think, he he he ....

We were lucky to be able to dodge the heavy snow in some parts except for the day that I had planned to meet Jane in Stratford. There was heavy snowfall the night before and the weather news about the road condition was not very encouraging. So I had to put safety first and decided to stick to the motorway on our way to London.  That meant that I will not be passing through Stratford and had to skip meeting Jane.  That was a great disappointment.

Considering the amount of time we were on the road, I think I have become quite good at reading the road signs along the motorway.  I was a bit worried whenever I see the notice "Salt Spreading" came up because that meant that there may be icy patches up ahead.

I also had to skip meeting up with Sheila because I had only one day (from the originally-planned two days) to walk-about in London. My sister came with us and since it was her first visit to the UK, she would want to see the popular sights of London.

But the main purpose of the trip was to attend my daughter's graduation at Loughborough University. I could not persuade her to defer receiving her scroll to the summer graduation ceremony. Otherwise we would have been spared the cold.

I have prepared a slideshow of some photos of our trip. Hover your cursor over the lower part of each picture to read the caption.

Email ThisBlogThis!Share to TwitterShare to FacebookShare to Pinterest
Tags family and other things

Happy New Year everyone.
Hope you all had fun with the fireworks last night.  Someone in our neighbourhood light up their fireworks with such a loud bang at the midnight clock that I felt my house shaking.  And set off a few car alarms as well.

As in previous years, I don't make any specific new year resolutions.  My usual resolve is to make each new year be better than the year before.  I know that if, by the end of the year, things don't work out as I had hoped for it will not be for the lack of trying.

To mark the new year, I have decided to go for a simple layout for my blog, very plain solid colour background.  And, I have chosen the simple white for the text background - no clutter and no distractions.

I need to change the header image also, seeing that it is now off-centre.  I don't feel like playing trial-and-error with the HTML set-up to centre it. Will do that a bit later.
9 comments: