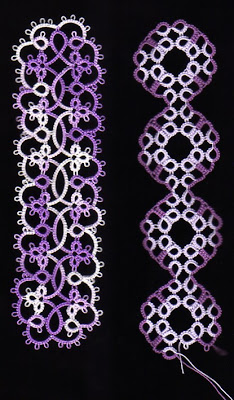 I have not tatted bookmarks for a while and felt like making a few.

The one on the left is a simple clover with a twist. I use Hakelgarn Online size 20 for this and it measures about 6 inches (15.5cm) long and 1.5 inches (4 cm) wide. I think it may look better if made using finer thread and made longer. I may add a tassel to it.

The one on the right .... well... this one was a race to the finish and I lost when I ran out of breadth, or rather the shuttles ran out of thread - both of the shuttles together. What a time to run out when all I have left to do are one split ring and one short chain. How frustrating! This is not a new design. The first time I made this was during the early part of my 25 motif challenge. I used Olympus 40 for this.
10 comments:

Email ThisBlogThis!Share to TwitterShare to FacebookShare to Pinterest
Tags bookmark

Remember this motif from Tatting with Anne Orr? I wrote about this in my January 13 post. I am working on this again but with a slight difference. 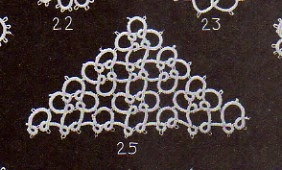 I am trying to go as big as I can with this motif, repeating each segment continuously without having to cut the thread. I only started this last night and have only reached this far.... 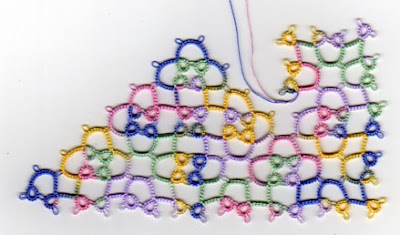 I have finished the first segment and made a turn at the end and am now in the middle of the second segment. I don't know yet which way I will make the turn for the 3rd segment.

The thread that I am using is DMC Dentelles 80, colour code 109. I have not used fine thread much in my tatting, so this will be a good practice.

And look what I received from Laura - some samples of hand-dyed thread! Yay!!!! 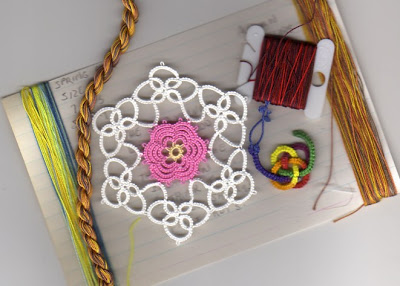 After reading so much about hand-dyed thread written by most of you, finally I can try it myself. Thank you Laura. Laura has included a rose snowflake and a cute celtic snail.

I have to find the right design for these ... I don't want to waste them, :-)
No comments:

Phew! It is Done .. Finally

I never though I'd finally finish this.... but I just did .... almost one year from the day I started it. There were long breaks in between, where I worked on other projects just to have a change.

Not saying much about it ... just feeling glad that it is over. The finished doily measures 32 cm across or 13 inches. It used up almost one ball of DMC Cordonnet size 30. The design is in the basic rings and chains, and clovers with the exception of a round of split rings somewhere in the middle round.

Here is a scanned picture, 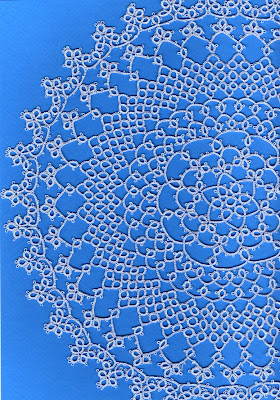 and the picture in full. 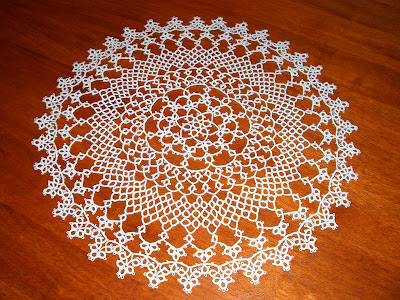 But one thing for sure, it will be a loooooong time before I start on another one this size, :-)
10 comments:

More on the Snowflake Evolution 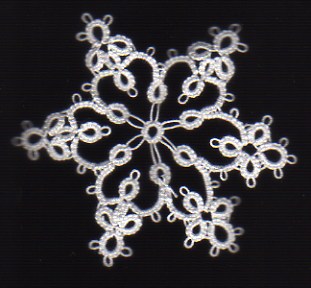 Well, I tatted it again with a couple of small changes. First, I made the long picots in the centre slightly smaller. 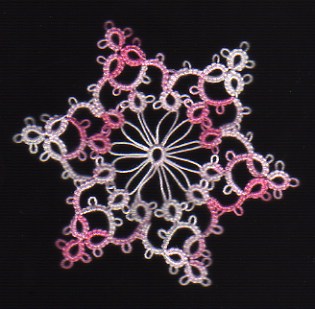 The second change is - I joined up the small rings that form a circle in the centre.
And the result is this new version .... 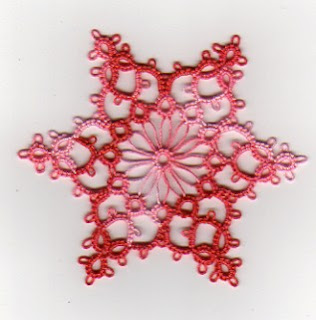 Making the long picots shorter make them more defined. By joining up the small rings, the picots are evenly spaced and form a more prominent shape of a daisy in the centre. 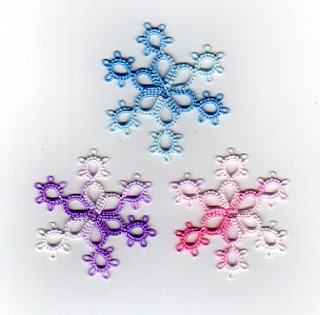 And here is another design, a very simple one, using the technique of self-closing mock rings all round, with a thrown-off ring on top of each one.

The on-going topic in the Online Tatting Class is on block tatting. It is a technique that I have not used before in my designs but I have tried it, learning through tutorials online.

I am so eager to learn more, so much so that I worked on the pattern even before the class meets. The pattern in the Block Tatted Heart by Sue Hanson.

The pattern was written in the traditional style for making blocks where you have to turn it after each row. Trying to be clever, I tatted the block in a way similar to Jane Eborall's method, but not quite the same, where I don't have to turn the block when making the next row of the block. Why did I say not quite the same as Jane's - I didn't feel like logging-in to the internet to actually look at Jane's method though I have an inkling of how it was done. So I made it up as I go along, but it was close.

And that is where the confusion starts.

At the second block, I have no idea which is the front side and which is the back side. I had to skip an SLT somewhere while doing the third part of the design.

By the time I reached block 4, I found my shuttles are swapped. I was using Shuttle 2 when the pattern says shuttle 1. It took a while to figure out block 4, had to undo a couple of times. Finally figured out that I need to do the double-stitches unflipped to start on block 4. That was not what the pattern says. And I missed a few mock picots in the blocks and had to really poke the crochet hook in to join the chains in the outer round. 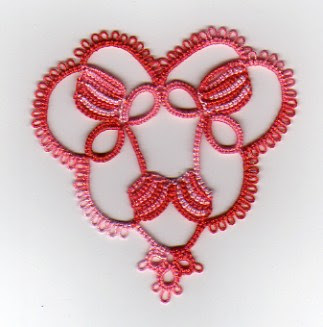 Happy Valentine to you.
p/s Don't look too closely, you'd see the mistakes that I made, ;-)
6 comments:

The Evolution of a Snowflake

I thought I'd share with you the various stages that I went through with my snowflakes design, instead of just posting the finished one. 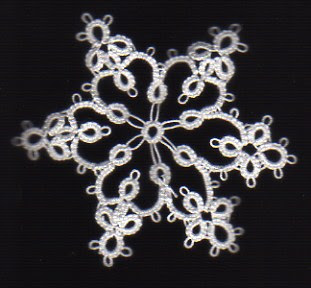 It began with this one. When I started, what I wanted to produce was the slight curve in the chain and I was thinking of something like a fleur-de-lis for the point of the snowflake. I think I managed to get the curve but wasn't happy with the point. That would be obvious because you can see that I tried several different ways for the points of the snowflake. 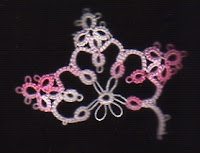 I finally decided on the style that I wanted and started on a new one. I wasn't happy with and cut off the thread before I got any further. The points were cuppping a bit, even though you can't really see it in the picture on the left. 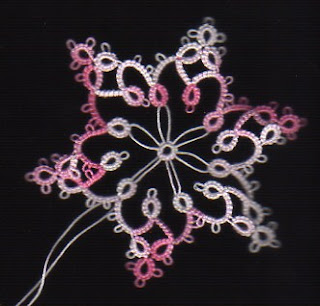 Not happy with how it is taking shape, I decide to change the design a little. I made the picots of the centre ring long and change the form of the points. It seems to look okay but somehow not quite what I wanted. The chains that are holding the thrown-off ring are not in symmetry with each other. I think this may be due the self-closing-mock-ring. But I continued and finished it anyway. I wanted to see how the long picots spread out when joined. They looked like they are evenly distributed but now it is the thrown-off rings that I am not happy with. I think they have be held in place.

I did it all over again, and this time, instead of six picots in the centre ring, I made twelve. Well, eleven actually, because the last is a mock picot joining to a split ring used to climb out from the centre. And this is what I end up with. I am happy with it .... for the moment. 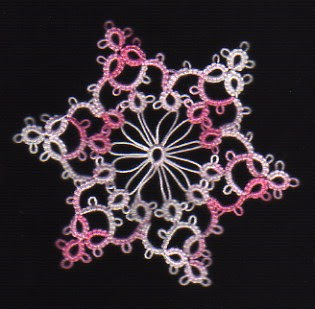 Though, if I were to make it again, I may join up the small rings together. Oh dear.... I hope I can remember where all the RW, DNR and the SS are. That is why I have to tat this again in order to write up the instructions.