It has been more than a month since I tatted anything, so I thought I better do something to get the feeling back. This is it - as it is now. 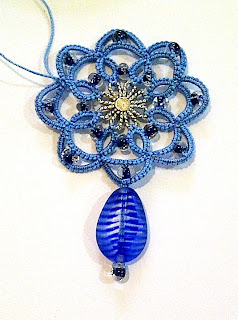 It will be turned into a pendant with tatted chain or maybe a choker.  I have not cut off the thread - while I figure out how to do the next steps.  Ideas are welcome.

This is a first of the doo-dad that Diane sent me a long while back.  So sorry that it took so long, Diane.
9 comments:

So, I tatted a flower motif using satin cord and another using size 20 cotton thread. The stitch count is the same for both.  Here is how they measure up in size compared to each other. 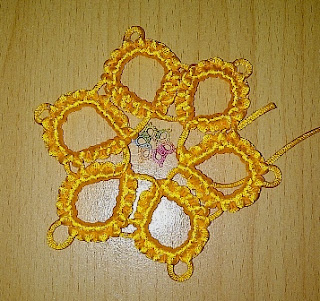 Out of hiatus for a while

Not much tatting done due to other commitments but I am popping out from the tatting hiatus for this announcement.


My three tatting books can now be ordered from these three online stores:

Tatters in the respective regions should be able to get the books much quicker now.  It does take a while if they are mailed out from Malaysia.

I had not been tatting seriously for over a month, but I did try something different - tatting with satin cords 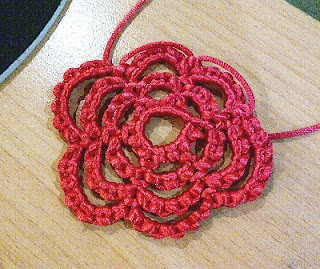 This is the largest/thickest kind of thread/yarn/cord that I have ever used for tatting.  The cord is the type usually used for making chinese knots and is about 3mm thick/wide. Because of the thickness of the cord, I hand-tatted this rosette.

The centre of the rosette is an actual tatted ring hand-tatted with the direct-tatting method as explained in the book The Complete Book of Tatting by Rebecca Jones.  Once I get into rhythm, it was not difficult to do direct-tatting, though a bit slow for me who is used to the sliding method with shuttles.  But, for someone who is struggling with the flip in shuttle-tatting, this could be a solution.  And, in direct-tatting, you can choose not to use a shuttle at all, since a shuttle is merely a thread carrier.

The chains in the outer rounds of the rosette are not worked like a standard tatted chains.  I placed a round of bare thread over the centre ring, joining the thread at each picot of the ring and back to the beginning.  The double-stitches are then added over the bare thread using the Dora Young knots used as in making split chains.

By doing it that way, I can start from the beginning of the cord and not somewhere in the middle like you usually need to when tatting chains - if you get what I am trying to say.

This video by Karen Cabrera shows how the double stitches are made over the bare thread.  It is also the method I used to wrap stitches over a cabone ring.
7 comments: