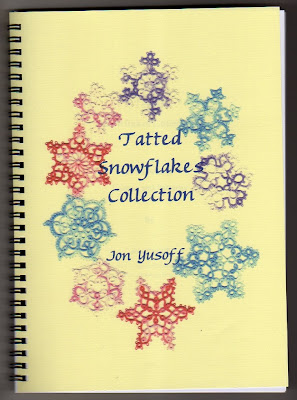 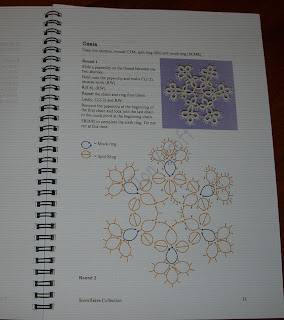 A sample page of a pattern in the book

and a slide show of the snowflakes designs available in the book.

Please e-mail me at jonyusoff at yahoo dot com for inquiries.
11 comments:

Octopussy - a Mother and Daughter Project 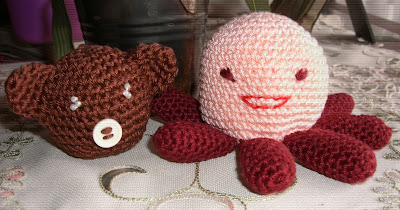 My daughter came home for her 2-weeks semester break and asked if I can teach her how to make amigurumis. And I said ... errr.... I have not made one before, I don't know where to begin.

But, not wanting to let go of the interest that she is showing for crafts, and seeing that her brother and sister are not interested at all, I must give this a try. I asked a few friends, like Jullie, Janet and Sue who are familiar with amigurumis for sites that have tutorials in them.

My daughter browse through some of these sites and selected a few that she wanted to try out first. And the results are the slit-eyed Octopus with the wide grin and the bear head with the button nose. My daughter knows a little bit of crochet because I taught her to make a crochet tote bag before, but she can't read patterns. So I read the patterns for her and told her what stitch to use.

I started her off by making the first two rounds and she continued making the rest until complete. Then, I showed her how to start making the tentacles for the octopus and went off to bed. The next morning I saw the eight tentacles all done and laid out on the table. I continued by sewing all the parts together. As you can see I had to improvise on certain things, especially the eyes. I used beads in the bear head with a button for the mouth and nose. And I used yarn for the octopus' eyes. I don't have the proper eyes and don't know where to get them.

All things considered, we are very happy with this project.
12 comments: 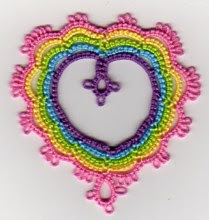 Well... I did what I promised to do. I made Laura's Victorian Heart again and I did not forget the ring at the bottom this time, :-). Here it is, in rainbow colours (almost .... because I am short of two colours of the rainbow). The drawback of using many colours is the cut and hide after each round.

I did this in a slightly different way from what Laura wrote but the ds counts are still the same. The first round (inside) was made the way Laura wrote it because I need to get the initial heart shape. But, for each of the other rounds I started at the top instead of at the bottom. And I used a SCMR for the ring at the bottom. 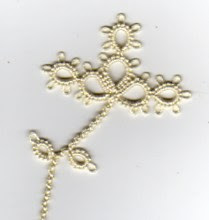 Email ThisBlogThis!Share to TwitterShare to FacebookShare to Pinterest
Tags heart 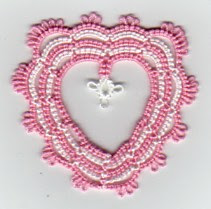 And to celebrate it, I worked on Laura's Victorian Heart. I was so eager to finish it, I made a boo-boo at the end. I was a little too quick with the scissors and totally forgot about the extra ring at the tip. Click here to see how it should be.

I will make another one - correctly this time.
I am so sorry about that, Laura. Your design is beautiful.
7 comments: