or a case of gapsosis,
that snippet of thread the peeks out between rings or chains when you do the next element of the pattern, like these examples. 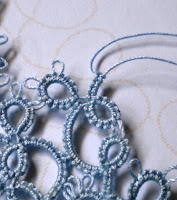 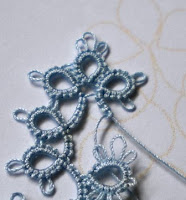 This is the method that I have been using to cure myself of the gapsosis.

I fold the previous element over before tatting the next part. 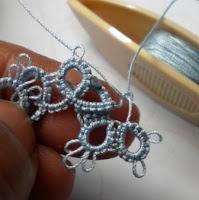 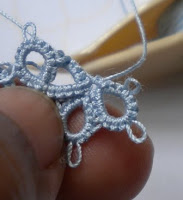 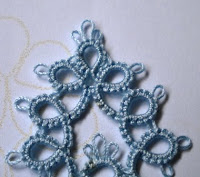 Once the first double-stitch is secured, I then go ahead and make the other double stitches at my normal pace. An example of a cured gapsosis is seen at the base of this trefoil where the two chains meet.
Look Ma .... no gaps!
10 comments:

How to Open a Closed Ring - Method 2

This is the other method of opening rings that I usually use if the rings are small, or if there are no picots close to the end of the rings.  I use a blunt needle or my tiny hook with this method.  It can be a bit of a hassle, especially if using fine thread, but sometimes it needs to be done, right?
Bring the shuttle thread towards the left a bit so that you can see the last double stitch of the ring.  Then insert a blunt needle, or the tiny hook, in between the half-stitches of the last double stitch, (pic 2).  The purpose is to catch the core thread with the needle or the hook.
Pull up the core thread with the needle/hook (pic 3).  As you try to pull up the thread, give it a slight jiggle to loosen up the first double stitch. You may have to try this a few times to make sure that you catch the core thread fully and not split it up.  After pulling up the core thread from between the half-stitches, do not let go if it.  Instead hold the loop with one of your fingers.
Then pull up the core thread from between the next half-stitch, (pic 4).  As you do this release the loop that is around your finger.
A loose shape of a double stitch should be visible, (pic 5) which is formed with the thread form the shuttle.  Enlarge the 'double-stitch' and slide the shuttle through.
Do not pull the shuttle thread tight after passing the shuttle through the loop.  Instead, keep a slack in the thread. Pull the two threads together to bring up another loop as shown in pic 6.  Slide the shuttle through this new loop to finish the step.
The last step (as in Pic 6) completes the step of undoing the last double stitch in the ring.  In the process, the ring loosens up slightly (pic 7).  You can now pull up the core thread at the base of the ring to to get a bigger loop before you start to unpick the following double stitches, or pull apart at the picot as in Method 1 shown in the previous post.  If this is still not possible, you can repeat the steps above for the next double stitch in the ring.
There may be other ways to open a closed ring but these two methods work for me.  I hope it helps you somewhat.

How to Open a Closed Ring - Method 1

This question was brought up recently in In Tatters tatting forum.  It is a very valid question which sometimes gets overlooked in the eagerness of explaining other tatting techniques.  Here is my attempt at giving this a go.

I usually use two ways of opening closed rings.  Which method I choose depends on the ring, specifically whether there are picots in it, and how close the picots are to the end of the ring.
Ha ha .... technically a ring has no ends because it goes in a round.  But in this case, the end is the side where you pull the shuttle thread to close the ring.

Method 1
Let us take this small ring with 3 picots in it, (Pic 1). In this case the last picot is close enough to the end for me to be able to pull the double stitches on each side of the picot slightly apart (Pic 2).
Then, using a hook or the pick of your shuttle or even the tip of your fingernails, pull up the core thread some more to make it longer (Pic 3).
Once you have done that, pull apart the base of the ring which will open up the ring further (Pic 4).  Once you get enough slack in the core thread, place it around your fingers and start unpicking each double stitch as required.

The new school season has started for most countries in the  northern hemisphere.  To mark the event, I am sharing with a new bookmark pattern named Two-by-Two.


You can download the pdf file from here.
9 comments:

This is the chart for the bookmark, 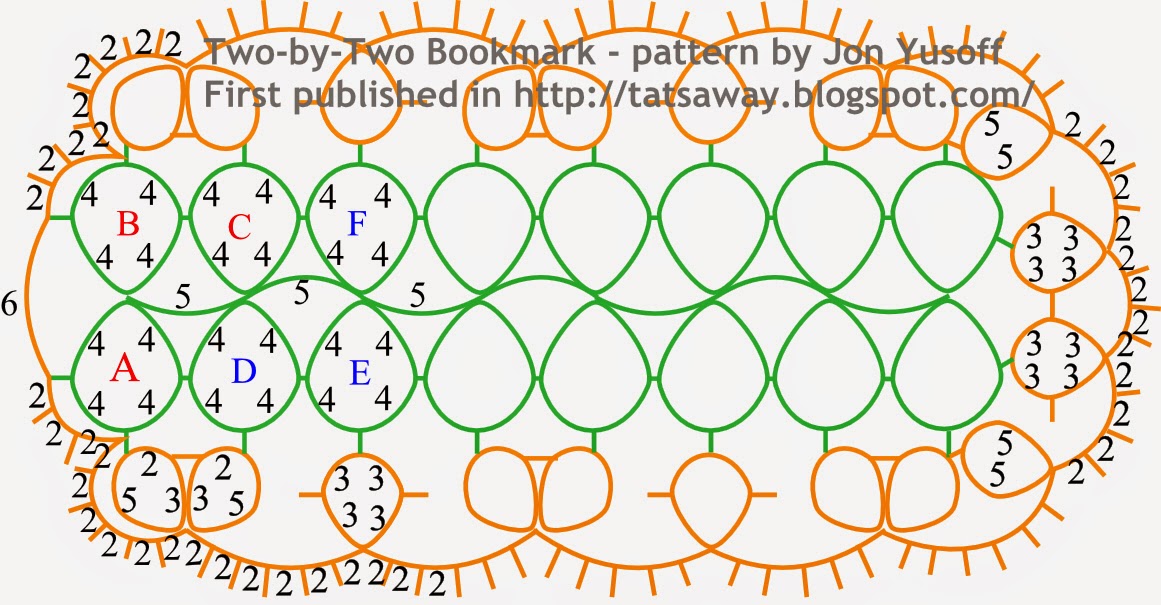 Please contact me if you have any questions about the pattern.
11 comments: