..... I don't like to tat doilies when they are made in rounds. They warped and bowled up like nobody's business.

Remember my earlier post about starting on a doily? This is where I have reached until now. Actually it is not much from where I stopped before. Just another two rounds of rings and chains. 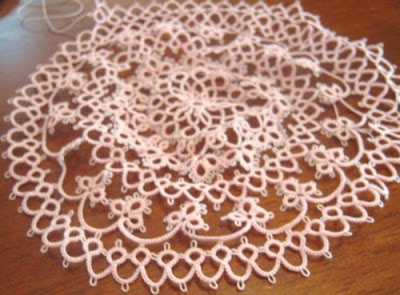 Can you see how much warp it has. No? Here is another picture taken with elevation

I tried pressing it under a heavy book overnight. It worked for the first few rounds but not the last two rounds. I unpicked the last round and added extra stitches to the rings but it did not improve the situation one bit, urrgghhhhh!!!! And it is such a beautiful design, *sigh*

As usual, when faced with frustrations such as this, I turned my focus to something else. This time it is knitting. Yes, I used to knit, but the last time that I held knitting needles was over 30 years ago.

My youngest girl asked me to knit a cardigan for her. She was so sure about it, she had already made a search for a pattern on the internet. *sorry - I can't give a link to the picture of the cardigan here because the site is taking too long to load* This is as far as I got up till today, 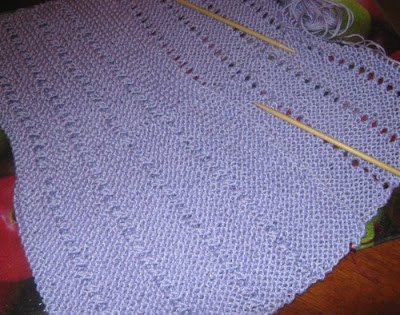 This is the lower part of the body. Instead of knitting from bottom edge upwards, the cardigan is formed by knitting the body sideways round the lower part of the body. Then, there is a yoke for the upper part followed by the sleeves. Luckily the stitches used are only garter stitch and stocking stitch. After 30 years of NOT knitting, those two I still remember how to do, :-).

At least I am getting some satisfaction with this cardigan. After the hard time with the doily, I still don't know what to do with it, :-(
11 comments:

After thinking about it for a while, I decided to take the plunge and start selling my tatting on etsy. All are welcome to visit my store, mytatter.etsy.com. There aren't many things there yet.

The latest listing is a set of tatting pattern made up of a medallion, a bookmark, a snowflake and an edging. I am putting them up as a set because they are made from one basic pattern. Here is a snapshot of them together. 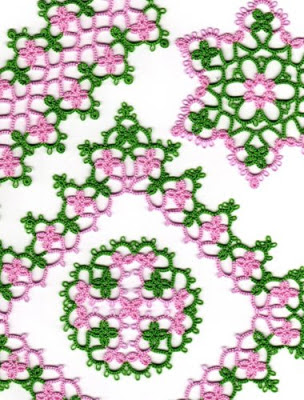 Wish me luck on this new venture.
9 comments:

Email ThisBlogThis!Share to TwitterShare to FacebookShare to Pinterest
Tags patterns

Threads from Heather and a Doily

Heather of The Tarnished Tatter held a giveaway to mark her blogavesary in May and I was among the lucky few picked to receive something from her. In my case, it's either a copy of her book or choosing 3 skeins from her HDT tatting thread. For someone who will never have enough pf tatting thread, naturally I chose the threads. I chose the many-coloured hand-dyed, the lemon freeze and the Bead box (I think)

I received the threads last week, and boy they are much more beautiful in person. I couldn't wait and started making some snowflakes with the many-coloured HDT. I think the snowflakes look pretty with that thread. The other two thread are still in their skeins. I have to think of something special for them. 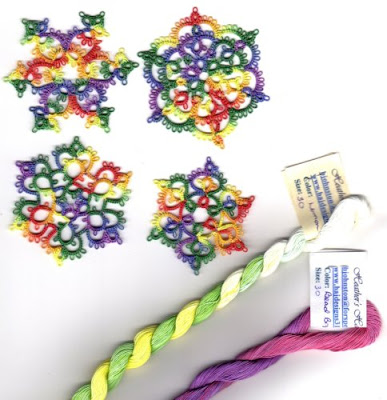 To see more of Heather's HDT, visit her etsy shop, hajdesigns31.etsy.com There are many other things to find there besides her HDT.

The designs are from my book Tatted Snowflakes Collection.

For no apparent reasons, I decided to tat myself a doily. The pattern is from the Japanese book, A New Approach to Tatting by Yusai Shokoin. I am using Omega thread in size 50 for this. 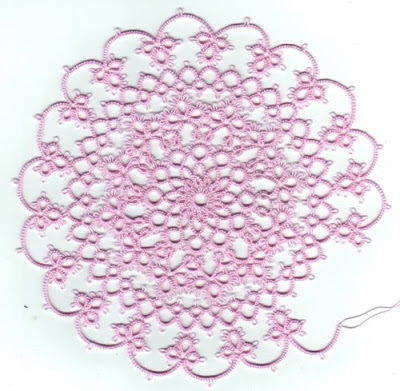 I have finished 4 rounds and almost finished the 5th round before running out of thread in one of the shuttles. Utilising the split ring and split chain techniques, I was able to work until the fifth round without any cut-and-tie after each round. There are 13 rounds in all. Two of the rounds are made up of small flower motifs. I foresee those two rounds are going to take quite a while to complete. I get bored very fast with repetitive motifs, :-)

Email ThisBlogThis!Share to TwitterShare to FacebookShare to Pinterest
Tags doily, snowflakes, tools of the trade 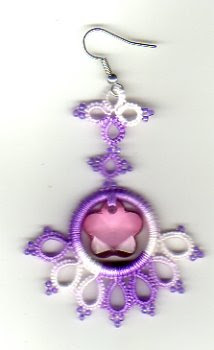 I should be doing something else, like
or mundane things like,
... instead I played around with my blog and it turned out like this! I hope it doesn't cause any problem with my visitors like it did the last time I tried to change it to 3-column.

For your viewing pleasure, here is a little bit of tatting for you, what else but another earring. This is not final yet, still tweaking it based on comments that my daughter made. She is my top critic on my designs.
14 comments:

Email ThisBlogThis!Share to TwitterShare to FacebookShare to Pinterest
Tags jewelery

Today is the official birthday of the King of Malaysia, or the Yang di-Pertuan Agong. You will be interested to know that we have had 12 Kings before this and the current one is the 13th. Amazing but true ....

The system of Government in Malaysia is based on the Constitutional Monarchy, much like the one in Britain. Malaysia practices a rotational system of appointing the King selected from one of the nine states that still have a reigning Sultan or royal Ruler. The tenure of each King is five years. As the fifth year approaches the end, the Conference of Rulers, made up of the Sultan/Rulers of the nine states, will meet to pick the next King.

If you are interested to read more about this, please visit Yang di-Pertuan Agong

I have always wanted to tat something from Mary Konior's book that I have, A Pattern Book of Tatting. Going through the book, I decided to make the one shown on the cover, the Primrose Path. I used two colours, pink for the rings and green for the chains. This is what I ended up with. Not bad actually! ;-) The centre part is made up of four pairs of the flower motif. 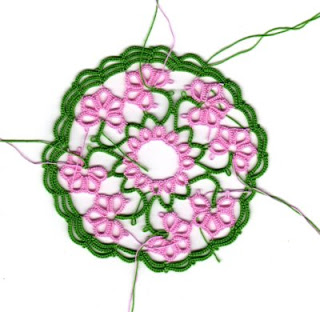 This is where it gets 'interesting'. Those pairs of feelers that are coming out from the motif are the loose ends that needs hiding, one from each pair of the flower motif. To make matters worse, at the third round of chains surrounding it, the shuttle ran out of thread - that seems to be happening a lot to me, running out thread. That adds another pair of ends to hide. Anyway, that is only half the story.

After the rounds of chains, there is an outer rounds made up of 12 pairs of the flower motif. That means another 12 pairs of ends to hide.

The magic thread is not working its magic on me when comes hiding ends, so I sew in my ends all the time. Now, I am using size 50 thread for this, and my stitches are on the tighter side. I use a small size tapestry needle to sew in the ends. With 18 pairs of ends to sew, can you imagine how much poking my finger will be going through!

Do I want to continue with this? Naaah ..... I think this is destined to be a UFO which has finished its duty on this planet Earth and has been recalled back to its mothership and decommissioned.