You may think that recycling is a recent concept. I'd like to share a little history on recycling from my younger days. This goes back a long way from back then.

My first recollection of recycling goes back to my childhood. What we have then was a man/woman that would go from house to house asking if there are any old stuff that we no longer need and would be happy to get rid off.

One would be a woman who would balance a big cloth sack on her head. She would stop at our house to ask my mother if there are any any old clothes for her. There are six of us children in the family and whatever clothes that we have were usually handed down to the next one until they are totally worn out and just turned into rags. So for this Recycler, we usually didn't have many things to give her, but she still came around and stopped during her regular visits. To this day I still wonder how she managed to balance the cloth bundle on her head hands-free!

Another would come around on his rickety old bicycle with one or two big gunny sack hanging from it. He would be looking either for old bottles, tin cans and any old metal parts. You can hear him coming because as he cycled, all the stuff in the gunny sack will be making loud clanging sound as the stuff inside knocked against each other. This Recycler usually spotted a beard and was scruffy-looking. So much so, he became a bogeyman to kids. Mothers would tell stories about him taking naughty children away in his gunny sacks to make sure the kids behave!

Yet another Recycler is the 'used-paper man' looking for newspapers, packing boxes, used note books and anything related to paper. And he usually rode a rickshaw or a motorcycle with a sidecab.

Nowadays, the recycling process is more organised. There are places where you can deposit anything that is recyclable. Some charity organisations will set up recycling drives to collect old toys, clothes and books. Some are willing too come to the house to pick up old furniture or bulky items.

But, among them still remain the used-paper men, except that they don't ride motorbikes anymore. Now they come in small lorries, playing pre-recorded tape announcing their arrival in the area. There are several of them going around each one with a unique signature tape. So naturally competition is intense among them. Before, when the papers used to be given away free, now they are paying for it, even though only for a small amount. But competition must be intense because the price that they are paying for old newspapers has gone up by two or three times what it was about 10 years ago.
If you manage to get this far reading the post, you'll be wondering what has this got to do with tatting.

For one, the mantra reduce, reuse, recycle doesn't work with tatting. Why?

Firstly, can you ever reduce this? 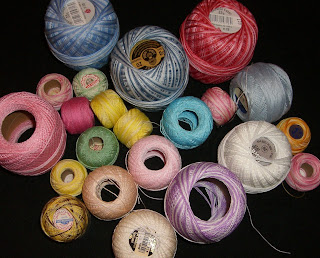 How many times have you felt like not having enough tatting thread and yet your stock is piling and the storage containers are bursting? And there is always the one more shuttle that you have to have, not counting the beads, sparkly thread and cobone ring and buttons .... and.... the list goes on. And how many sheets of paper have been used to print off the free patterns readily available online?

Secondly, reuse? Oh come on! How many times are you willing to unpick mistakes that you have made just to be able to reuse the thread. And what about the designers who make so many tries before getting the perfect design. And we all know that the thread will go all fuzzy after so many unpickings and will not be any good for tatting after that.

And finally, how do you recycle this? 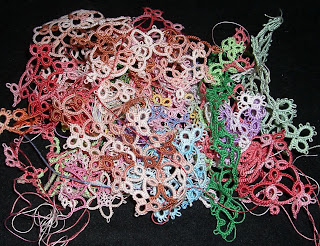 That bits of thread left from the shuttle that is not quite enough to make a tiny butterfly, or the retries to get the design that you are aiming for, or the ones that didn't turn out right because the instruction was misread!

Well, that is my story and I am sticking to it!
9 comments:

Another pattern from an earlier design - a rosette motif. The pattern uses shuttle and ball. 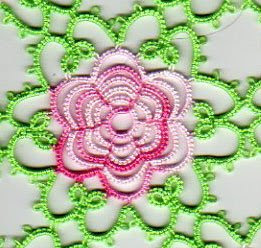 The next rounds are all chains working round this centre ring.

Continue with the other rounds for the rosette following the ds count shown in the chart.

For the final round, you'll need about 180cm of thread in the shuttle wound CTM. 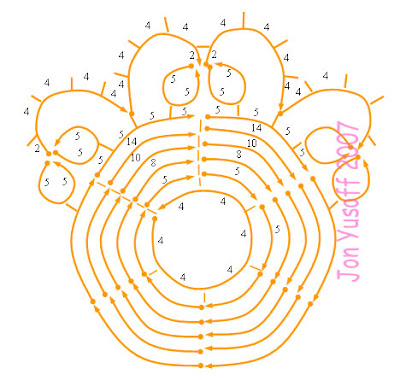 Begin with R(5+5), join to the last picot in one segment of the rosette. Do not reverse.

R(5+5), join to the first picot of the next segment of the rosette, reverse work.

Repeat the first two rings, joining to the next two picots of the rosette respectively, reverse work.

Continue from (*) to complete the round.

Join up the motifs together to make a doily as in the picture below. 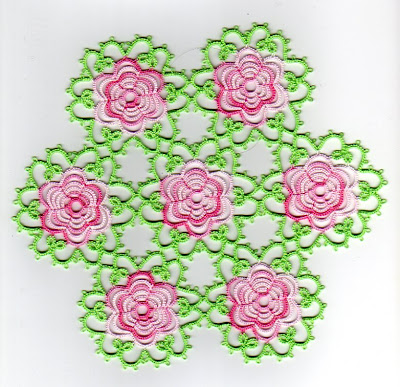 .... no..... not from tatting, but from bodily needs of food and water .... he..he..he.....
It is now the month of Ramadhan and is the fasting month for Muslims around the world. It is the 11th day today and thankfully everything is going great.

The day starts with a very early morning meal, or sahur as we here call it. I usually wake up at 4.30am to prepare the food. My family like a light sahur, so I don't have to prepare much, either heat up the leftovers from the previous night or fry some paratha (flatbread) which is taken with light curry or dhall, and hot tea. I find that by taking hot drink for sahur I don't feel thirsty much during the day.

The end of sahur is around 5.40am, at which time we have to stop eating until it is time for the breaking of fast which is at dusk. For countries in the tropics like Malaysia, the fasting duration is about 14 hours or so. The time varies throughout the year depending on the season. Currently, the time for breaking of fast is around 7.18pm. I stayed in England for five years once, and during one of those years I had to fast during summer, almost 18 hours, but I did not feel any adverse effect, thankfully.

For the breaking of fast, we are encouraged to take something sweet and the best would be to eat dates, as what our Holy Prophet did. Besides that, there'll be some other sweet and savoury food as well. This is usually followed by a slightly heavier meal. It may look kind of funny, like having desserts before the main course. Tempting as it is, after a whole day without drinking, I don't take iced/cold drink during breaking of fast. Instead I take a cup of tea, again. I feel more tired if I take a cold drink.

There is a culture in Malaysia where every Ramadhan, there will be bazaars set up across the country, selling all kind of foods to be taken for breaking of fast. The stalls open for business in late afternoon. It will be bustling as evening approaches as people stopped at these bazaars on their way home from work to buy the food for breaking of fast. In a way it is a convenience to these workers because it saves them having to prepare the food in time for the breaking of fast. Yeah, I should know because there had been time when I had to break fast in the car because it was time but I was driving and still stuck in the traffic.

But Ramadhan is more than just not eating or drinking.

Ramadhan is special.
There are many more beautiful things about Ramadhan. It is the month that is waited for in earnest and to let it go with lots of sadness.

Wishing all Muslims a very blessed Ramadhan ul Mubarak.
For the tatting bit, the pattern for this doily has been added to my Patterns Page. Click the link in sidebar to go there. 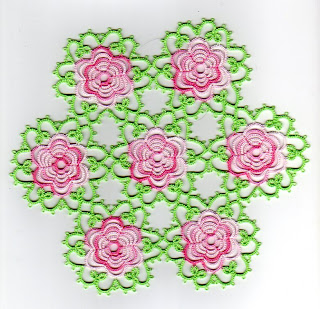 Has anyone tried tatting the medallion #38 from the book Tatting with Anne Orr?

I had problems when making it the first time by following the pattern for the medallion exactly as in the book. I followed the instructions by making five repeats and the medallion cupped-up on me. So, I improvised and make it with six repeats and it turned out just right. 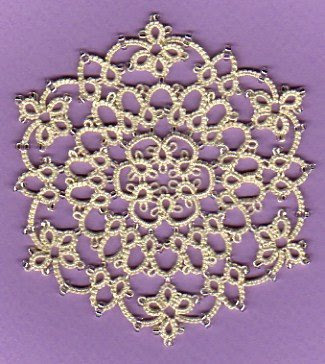 I made a small change to the design by adding an outward ring to each of the clovers in the last round. It now looks more like a hexagon that a round medallion.
5 comments:

Email ThisBlogThis!Share to TwitterShare to FacebookShare to Pinterest
Tags rounds and other motifs, vintage design

This is my second time making the Heart o' Daisy. 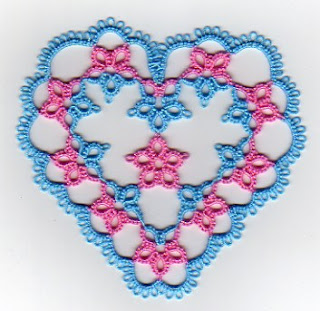 This is the split rings version done in three rounds.

First round is the pink daisy in the centre of the heart. I made this one first and then work the second round for the rest of the daisies around it in one pass.

Third round is tatting the chains on the outside.

The instructions for this heart is in my Patterns Page, but not the split ring version.
9 comments: