This is the first of five edgings by Norma Benporath from Five Dainty Designs For Tatting from the Trove published on 3rd January 1935.

While we think of early tatting to be either in white, cream or natural thread colours, Norma Benporath advocated the use of colours for these edgings. As with the earlier patterns, it was not stated if is is a shuttle-and-ball pattern or a two-shuttle pattern, or when to reverse and when not to reverse.  I started with shuttle and ball and soon enough I realised that part of the long chain is going to twist when I joined it to the ring as per the instructions. (I did not take a picture of this so cannot show the twist). To avoid the twist, I needed to make the SLT in several parts as I progressed, so I stopped.

I started again with two shuttles, and this is the result. 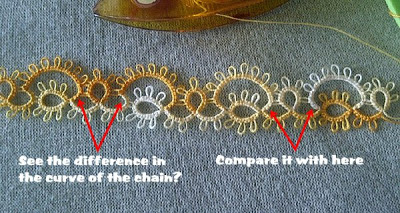 But even with two shuttles, there are still some parts that I think could have been tatted better. The parts that I was not happy with is in the short space in the chain which I have pointed with the arrows. To achieve the symmetry in the chain before and after the ring, I had to reverse work, switch shuttle and made a picot on the the underside of the chain. Well .. okay, call me a perfectionist ... but I know that, that non-symmetry is going to be staring at me each time I look at it.

I don't tat edgings so much but I like edgings because they can be turned into bookmarks.  That is what I did with this edging,

I may reduce the number of picots in the middle when I tat this again.

On another note, there is a discussion on In Tatters about sharing charts drawn out of worded patterns that are already available for free online, whether such action infringes any copyrights or not.  When I started tatting these Norma Benporath's patterns I can see that the instructions may be difficult to follow to someone who is not used to the old style of writing tatting patterns.  Although the Trove website provide for readers to make corrections on the OCR text, the corrections did not really simplify the patterns itself.  I had thought about drawing charts for the patterns that I have tested and maybe sharing them with other tatters.  Now that the issue of copyrights has been raised (not directly to me on these Benporath patterns, by the way), I am unsure of whether this can be done or not.  The discussion is still open on the topic.
7 comments:

Continuing from previous post, this is the finished coaster,

They are supposed to be six heart motifs in here, but I can't see them anymore when all joined up like this.  The finished size is 10cm across, or slightly under 4 inches.  There is a tiny bit of cupping in the centre but should flatten out with some pressing.

When Jane posted about her joined-up hearts, it reminded me of a heart pattern that I joined up in a similar way. The original pattern was one that I created for my 25-motif challenge way back in 2006.  I should have written out the pattern for it when I completed the challenge, but as usual, tatting is more interesting that writing patterns.

With that basic heart design, I joined it up together to form a small coaster.  I can't recall if I have posted a picture of it anywhere, so here it is, 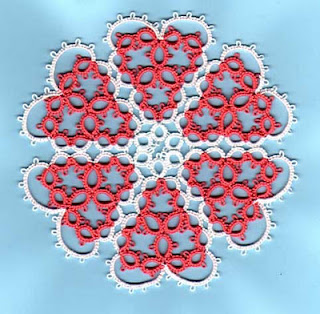 This was made when I first learned split rings and wanted to put to use what I had learned.  The coaster is made up of six separate heart motifs joined together.

Triggered by Jane's hearts, I revisited this designed to see if I can modify it a bit so that it can be tatted in one pass.  I think I have found a way, looking at the progress so far, and I am liking the way it is turning out. 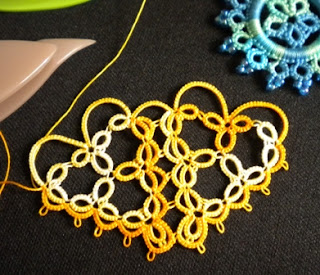 This new version was tatted with size 80 thread that just happen to be in the shuttle.  I am going to tat it again with  a bigger size thread.
15 comments:

Design from the past in latter techniques.

This is the last motif from Norma Benporath's New Medallions in Tatting. 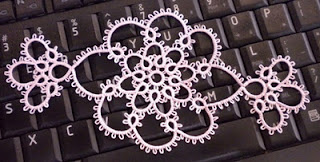 This rather unusual shape piece is quite easy and straight-forwards to tat. I did not need to make any changes to the pattern as published on the site but I did change the construction method.

Firstly, the motif begins with the centre ring with 8 picots in it separated by 3ds.  The instruction was to begin with 2ds, make the eight picots and end with one ds, cut and tie to complete the ring. (Note: two ends to hide). Starting with 2ds and ending with 1ds completed the 3ds separating the picots.

Round 2 is a shuttle-and-ball pattern which you can begin with CTM to reduce one pair of ends, but still ending up with one pair at the end of the round.

BTW, Jane gave a very clear description of mock picot in Day 3 of her TIAS which, if you have not started on it, you don't know what you are missing.  Even if you don't plan to join the TIAS (but I hope you do), go over to the TIAS blog and enjoy reading Jane's commentaries of the guesses that have been coming in.  I need to catch up on the TIAS myself as I am only at Day 2.

An interesting feature of Round 3 is the sharp turn in the chain on the two sides of the motif.  This effect can be achieved by making a SLT or tatting a mock ring.  Usually, an SLT or mock ring is utilised when making a ring sitting atop a chain without using a second shuttle.  This is the few times where the technique of SLT or mock ring is used for a design element.

For discussion purposes, if a second shuttle is used, the resulting chain will give a smooth curve as in the other six chains, and will show a totally different effect to the motif.
6 comments:

This is my third venture with Norma Benporath patterns that were published in the Queenslander newspaper.

Before I go to the patterns, for the benefit of those who may have missed my earlier posts, I have embarked on tatting patterns by Norma Benporath as published in the Queenslander newspaper.  These articles and patterns were scanned and made available online in the Trove website. The text for the patterns were captured by OCR (optical character readers) and given in the sidebar of the page.  Readers are invited to go through the text and make corrections if they come across any mistakes when captured by the OCR. A number of tatters in InTatters  have undertaken to go through the digitised text to verify the pattern text.  I have decided to go a step further and actually tat the patterns based on the digitised text and see if they tatted up as they should be.

My third pattern is from New Medallions in Tatting, published on January 31st, 1935.  There are three patterns in this article; two square medallions and one with an 'unusual shape' (that's the description as in the paper).  Here I have finished one square and partially completed the other. I will not continue with the bigger square because I made a mistake  in one of the chains. 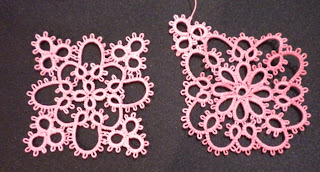 Talking of mistakes, I needed to correct the stitch count in the text of both squares and corrected the text in the website as well. One mistake was caused by the OCR capture.  Another was the resulting non-symmetry in the design if I had tatted according the published instruction.  There was another mistake in the bigger square where the clovers should be joined to the square because, following the published pattern, it did not look like the scanned photo as shown in the newspaper.

In the course of tatting NB's patterns I noticed a common feature in several of the patterns, and that is the stand-alone clovers.  I call them stand-alone clovers because they are tatted individually and not joined to the rest of the tatting by any chains, but rather only at the picots.    In these two squares, the clovers shape the corners of the square.  This feature was also found in a doily that I tatted earlier (scroll down to the end of the page to see the doily).
6 comments:

Commenting problems solved, I hope so .....

I changed my browser to Firefox and now I can leave comments again, yay!  I was using Google Chrome before, when I was having the problem.

I left a test comment on Tat's Heaven blog and it went through just fine.

I also noticed that I can reply to a specific comment and my reply came up under the comment that I replied to.  Isn't that wonderful? Now a reader can relate  to the previous topic that I am replying to and would not lose the train of thought.

Why didn't I notice that before? Is that a new feature of blogger?

Since there was no tatting in the earlier post, here is one.

This is my final rendition of the Norma Benporath pattern from this post.  I changed the third round because I could not make head or tail of the instruction from the Trove website. I cut the chains drastically in a couple of places in order to get it lying flat.  I am happy with this for now and have started on the next NB pattern from the Trove which I will share later.

I am having problems leaving comments on other blogs.  So far I have tried in two blogs and both won't allow me to.

I wanted to wish Gina of Threads of a Tatting Goddess continued good health on getting the good news on the remission.
I also wanted to say that I like the new line of hook shown on Tat's Heaven.  I wanted to suggest to 'Im in the garage' if it is possible to have it double-pointed, i.e. a hook at each end in different sizes ...... just a thought.