Dimpled rings... or are they? 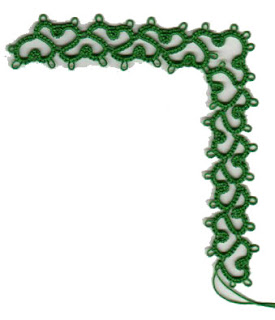 Here is another edging that look like a string of dimpled rings. Would you be surprised if I tell you that they are really chains?

Yes, chains all the way!

Still need some tweaking though. I have a few ideas that I want to try with this design before I am happy with it.
5 comments:

Hearts on a string

After reading Steph's comment to my previous post about seeing hearts in the edging, I decided to make it again. This time I made each repeat in one colour so that it alternates between the pink and the green.

I am calling this design Hearts on a String. I may put up the instructions in a different post.

And now, a little about Taking the Corner 101 0r How to turn the edging corner. This is not a tutorial but more of a tip on how to do it.

My one only tool for this is a small frameless mirror that has a straight edge.
I found another one to replace the current one. I found it in one of my handbags when, out of the blue, I felt like polishing my leather handbags. It is a small purse mirror with a plastic frame. I had no problem removing the frame because it had cracked a bit. Luckily the mirror itself has no cracks in it. 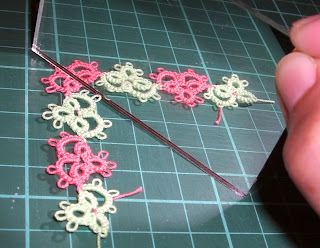 Doing it on a cutting board with gridlines on it makes it so much easier to get the square corner. But you can get different angles to the corner if you rotate the mirror sideways while keeping the corner fixed.

By moving the mirror along the length of the edging, I can get different shapes of corners like the ones shown below. 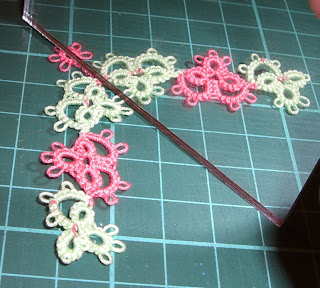 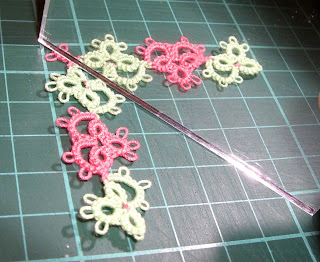 After I have decided on the corner that I like, I then may have to add one or two rings or chains to improve on the shape further. That's it! - How I turn the corner.
9 comments:

My first tatting attempts was doing edgings. That was so long ago when I was about 10 yo. And it was not even my own tatting. It was a friend's and she was showing me how to tat.

A few days back, I had this flash in my mind about doing edgings again, but with an added factor. I noticed that most patterns for straight edgings only give the instruction for making the straight side. Very seldom do I see patterns that includes making the corners.

That is what I decided to do, make edgings and tat the corners as well. I started by designing these two simple edgings ... very basic. The outer one uses shuttle-and-ball while the inner one need two shuttles.

The added bonus in the centre is a square motif made by tatting the corners of the inner edging. 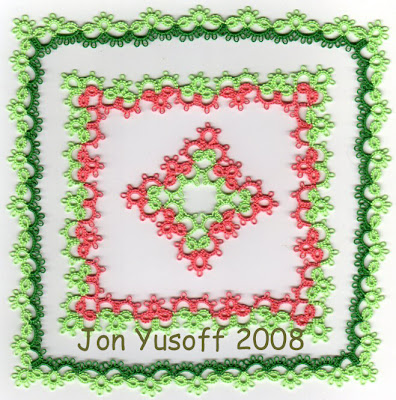 I may even do up my version for the corners of some vintage edging patterns and show them here. One question though - if I do that, will it be alright if I write up the instructions and post it here? I mean, I don't want to be infringing any copyrights on those designs.

p/s - I have had to resort to putting my stamp on the photos after a photo of one of my snowflakes that I placed in my Flickr was used by someone without my permission. I am glad that it is not someone from my circle of friends because I know we are a group of ethical tatters and would never do such things.

Email ThisBlogThis!Share to TwitterShare to FacebookShare to Pinterest
Tags edging, rounds and other motifs

What do you all think of my new banner?

I got tired of the old one and felt like a change. But the credit is not mine - my youngest girl did this. She is back for a three-weeks college break and has nothing much to do. She likes to play around with Photoshop on the PC and is ever so willing to show-off what she can do, :-)
6 comments: 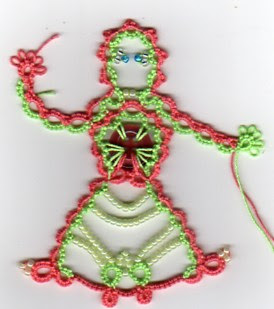 Booo..hoooo ... after looking at all the completed TIAS, my TIAS will remain a baldy..... and it is totally my fault. I am so ashamed to post the picture here ... but I will.. so that you'll all know that I did try. Here it is ... or what it turned out to be.

There are a few mistakes -
I am short of one split ring in the head part, so instead of rounded it became slightly elongated. Because of that too, the left arm is shorter than the right arm. And I ran out of the red thread so she ends up with one red hand and one green hand.

I improvised on the eyes because I don't have any beads larger than what I was using . Instead I used three beads together with blue in the centre. Now, doesn't she have the loveliest blue eyes.

Another thing different is the way the I join the rings on the second half of the split ring. In the pattern, Jane wrote to make a lock join. I assume a lock join will be to pull the working shuttle thread through the joining picot.

To make myself feel better after the boo-boo with the TIAS, I decided to stay away from shuttles for a while and crochet a bit. I finished this doily, all blocked, in over three days. 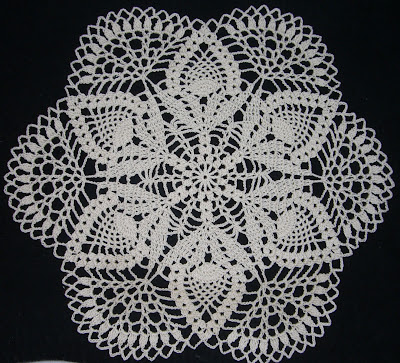 And my conclusion is - crochet whips up things faster than tatting. I wonder if you feel the same way...

This doily measures 13.5 inches across, mainly because I used a thicker crochet thread than the finer tatting thread. But considering that there are 18 rounds in it, it does crochet up very fast. I know it will take me ages to tat an 18-round doily, even if it is only using the basic rings-and-chains in the design.
10 comments: 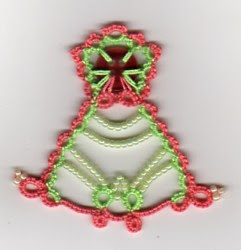 I have been tatting a couple of things these past few days ... but I don't know what I am tatting.

First off, it's Jane TIAS. Here is my Day 8. I put in my guess to Jane, but as expected, I did not get any little bit of hint from her.

But it is looking very much like the shape of a woman's body in a long dress. The lower part with the beads is the skirt, and the upper part with the button is the bodice. The next part is to make the head, and arms. I even suggested to Jane that this lady might be holding a parasol. And, the bonus that Jane is talking about that will come at the end of the TIAS might just be a gentleman friend of this lady here!

You know, I have this sneaky feeling that Jane doesn't have the final design figured out yet. She is working and changing it as the guesses are coming in so that she can side-step all of us, he...he...he...

The other piece is a mystery so I can't show it here yet. It is a challenge that Gina is currently having on her blog where she gives a written pattern without the picture. Then, you try and tat it up and see if you can figure out the design. I think I did it correctly because I can see the semblance of a motif in it and I got the number of repeats done as in the pattern. All can only be revealed on the 15th, so you and I have to wait until then to see if I managed to get it right. But I am still lost with the edging pattern.
6 comments:

Caught up with Jane's TIAS

I have been following Janes's TIAS from Day1 but did not join in until now. I guess, I was put off by having to use so many beads. I have used beads in tatting before. Most of the time, the beads are strung on the thread before tatting. I try to avoid putting beads on joining picots because my tiniest crochet hook is still not small enough to go through the holes in the beads that I have.

But, the recent discussion in the tatting community about how to add beads to tatting finally pulled me out of one of my 'duh' moments. With the many tips given, I finally took my shuttles and load up for the TIAS. And I did Day 1 right to Day 6 in one sitting. Here it is - 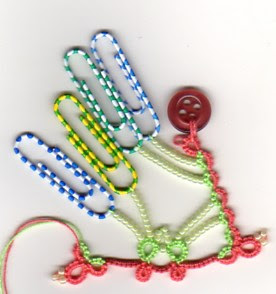 Anyway, I took a look at Day 7 but only at the diagram and thought .... It's the same as the other half, working in reverse. So, feeling clever, I did just that. I tatted the rest of it without looking at the written instructions. And ended up with this - 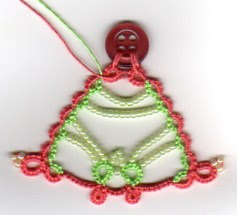 I didn't see the RW after SR19 and the right-side/wrong-side tatting for R20. Serves me right! If you look closely, my thread for Sh1 is on the wrong side of the ring.

Now I have to wait for Day8 to see which direction it is going. But I think it won't be much of a problem because the red thread of Sh 1 has run out and I have to add more thread anyway.

While I am on this, would the guesses on what this is be different if we had been looking at it this way? 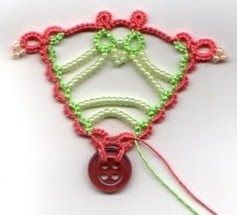