A few photos to show how I joined the squares for the mat.

As you can see in the last photo, I have made the extra small ring in preparation for when the adjacent square will be attached to it later.
5 comments:

This is the next part of the instructions for the mat.

For this, we are going to start over with a new square.  The one that I gave in the first post is to show the stitch count for the basic square motif. it will not be used in the construction of the mat proper.  You can use that basic square as a guide for the stitch count which will used from now on. It is not a complicated stitch count; you will remember it after the first or two repeats of the motif.

The charts that I am giving after this will be without any stitch count.

The first of the motifs for this mat will be a corner square. If you recall the basic square has no joining picots on the outside.
(This is part that I was struggling with previously in trying to write the instructions.  I hope it makes sense).

The first corner square is done slightly different from the basic square in order to provide for a place to join the 2nd motif to.  It is done in  such a way that parts of the 2nd motif are tatted together in the corner square.  I hope this becomes clearer looking at the chart below. 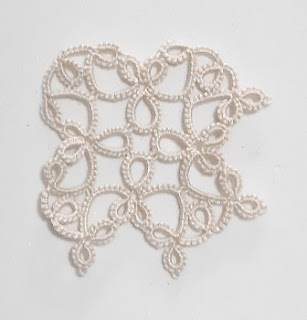 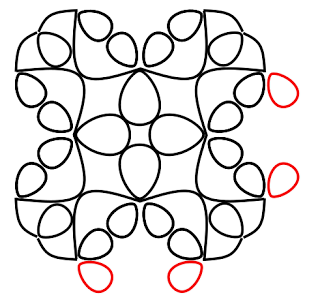 The red rings are part of the adjacent squares, below and to right of the corner square. It has the same stitch count as the ring adjacent to it, respectively which is (6-6). 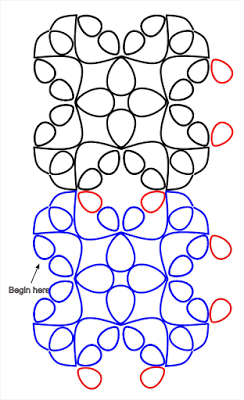 I have added another motif ti the chart in blue, which I will call the side square. The side square is joined to the corner square at the base of the two black and red rings.

As you can see, the side square is also tatted with the rings for the subsequent motifs included in it. Continue making the side square until you have reached the length you require for one side of the mat.  Finish the side with another corner square, paying particular attention to the placement of  the additional rings for the next motif.

The side square on the other side of the corner motif is similarly tatted, as shown in green in the chart below. 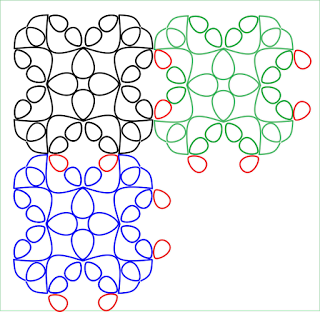 I will stop here for now.  I think you have an idea already of how this progresses as the mat grows.  For the sake of completeness, I will come back again with instructions for the inner square.
3 comments:

I am re-visiting an 'old' design that I made years ago, in 2011. Some of my readers may recall this rectangular mat. 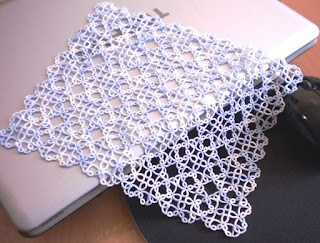 I am looking back at this with the intention of preparing the instructions for this mat.  I have looked back at it a few times before trying to think of the best way to prepare the instructions. I think I have figured it now.  But it is not a straight-forward share; I will be giving the instructions in several parts over a number of posts.

I am starting off by giving the pattern for the basic square of the mat, and the stitch count for it in the chart below. 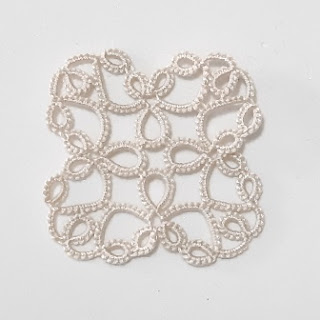 The pattern requires two shuttles.  As a guide, if using size 40 thread, you'll need approximately 2.6m of thread in each shuttle. Make all the joining picots small. I count the join as the first half of the double stitch and continue with the second-half after the join. 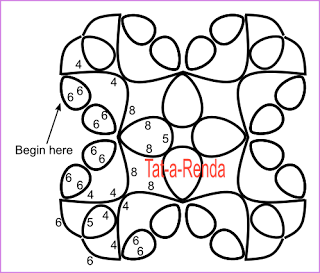 As you can see, there are no picots on the outside to join to the next motifs to grow the mat. That will be explained in the coming posts.  Come back later to check the next steps.
9 comments:

JS Masterpiece Round 5 and hiding ends.

I am starting Round 5 of the Jan Stawasz doily and want to share some of what I had done and planning to do.

In my earlier post, Carollyn (Madtatter80) asked about the size difference between size 20 and size 80.  In this photo, I placed the size 80 over the size 20 of the doily that I tatted a few years ago.  A quick measure and simple calculation showed that the size 80 is just under three-quarters the size 20 doily. 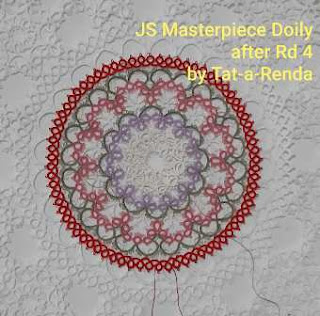 I tatted a sample of Rd 5, repeating the red of Rd 4 in the centre of the motif of Rd 5. I felt that it may look too 'dark' with the reds close together and decided to just use the ombre. 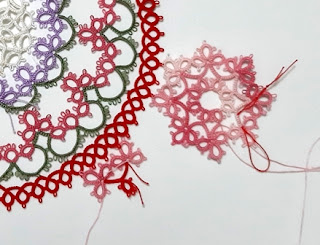 I have been using several methods of starting and ending my tatting that leave only ONE end to hide at the end.

I start with the Continuous Thread Method (CTM) wherever possible which straightaway eliminates two ends at the beginning.

If I have two shuttles with the same shade of thread, I can still start with the CTM, by pulling out some amount of the tread from one of the shuttle and start tatting partway from the end that I had pulled off. This thread that I had pulled off (the 1st shuttle) becomes part of the 2nd shuttle thread.  When that runs out, the thread from the 2nd shuttle is added by the easy tatting-over-tails method.

If using to different colours, there is another way of starting by tatting over tails described by Jane Eborall in her techniques page for Starting Ring no-knot Method that straightaway hides the two ends at the start.

As for the ending, Jane has also provided a clear tutorial in pictures of hiding one end in the last chain, Hiding Ends no-knot Method.

These are the methods that I have been using that leave me with only one end to hide, which I usually sew in.

However, Rd 5 of this masterpiece doily has 12 motifs and I don't fancy sewing in 12 ends of size 80 into tiny double stitches that I can barely see.  And so, I decided to re-visit the other technique of hiding ends, i.e. the magic thread trick. Again, I am sharing Jane's tutorial because she made it so clear and easy to understand.  The only thing is that, the loop of the magic thread must be added at the beginning (where you started) and I tend to forget to do that in previous cases.  You can see this loop (the red loop) in the photo above.

Who knows, this technique may grow on me and I will continue to use it for other projects.
6 comments: