Working on the next NB Pattern

I've been quiet in recent weeks because I have not been tatting much and there isn't much to share anyway.  I did put up short posts in my Facebook page though, (also named) Tat-a-Renda.

My progress with the large NB doily has been slow too.  This is the latest picture of it. 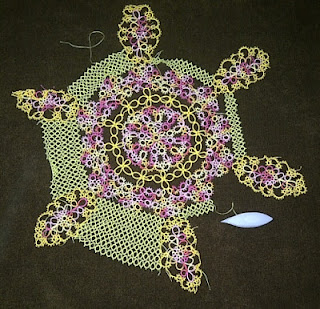 I thought I can be done with the mesh or rings before I start on the next drawing of another NB's pattern but it is not moving fast enough.  So, I decided to work on charting the NB medalllion pattern from the Trove site, linked here.

I have tatted these medallions before and wrote about it earlier. I decided to tat them again because I did not finish tatting all three.  I need to get them done and post the pictures together with the charts before sharing in my blog.  I have finished the largest of the three which is this oblong shape shown here, and have started on one of the squares. 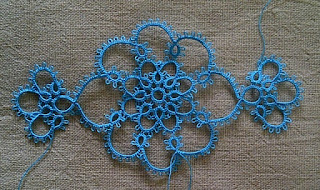