Another picture of the doily in progress

Here is a close up of the oval for the next round of the Norma Benporath doily. 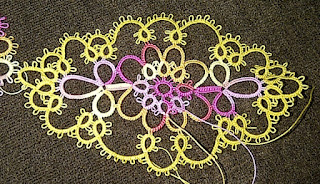 In the original pattern the two clovers at each side are stand-alone clovers. "Stand-alone" clovers is a common feature in most of Norma Benporath's tatting that I have tatted.  Each one usually stands on its own without any chains holding it up and connected to the other parts only at the picots.  Rather than doing them separately, I have added in chains joined to the centre motif thus making it possible to the centre in one pass.

These ovals are joined the the rest of the doily like so, 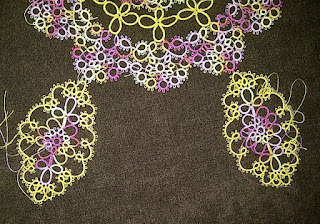 The space between the ovals will be filled by a mesh of rings to cover a space of about 4in. wide.  I have not decided what colour thread to use for the mesh of rings.  I can continue with the yellow but feels that it will be a bit too bright.  Using the multi-coloured thread will create a big blob of colours without any clear defined pattern, as sometimes happens when using variegated/multi-coloured thread.  Furthemore, using either will add to the fiery nature of the whole doily thus far.

So, I am considering toning it down by using this shade of pink as in the picture below, unless I go the opposite and use something like green! 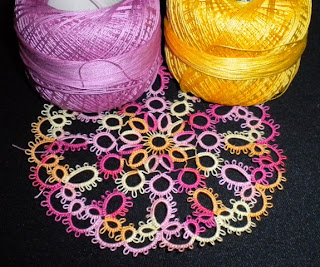