NB's The Charm of Tatting at Round 3

This is an update of the Norma Benporath pattern, The Charm of Tatting, at round 3. 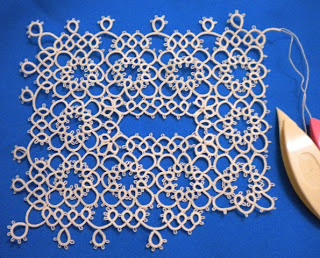 I decided to use two shuttles for this round since there are thrown rings in it.  I did start with shuttle-and-ball and utilise the shoe-lace trick (SLT) but the resulting effect is not to my liking, as shown below. 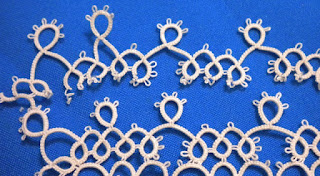 The one on top is tatted with shuttle-and-ball.  What I get are 'kinks' in the chains where the thrown rings are.  Compare those with the smooth chains when tatted with two shuttles.  That is why I almost always choose to work with two shuttles when there are rings on the upper side of chains, unless the construction of the design requires that I do a SLT.

Another interesting feature that I have found of NB's patterns is the way the join is made when two rings are joined to the same picot. 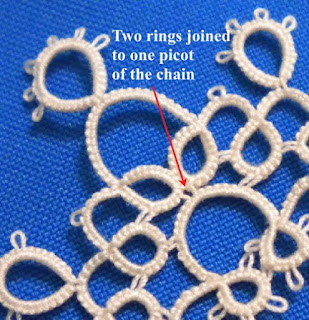 What I have seen often is just as it is - two rings joined to the same picot.  But NB's joins are slightly different in that a small picot is made immediately after the first ring is joined to the picot, with only one double-stitch between the join and the picot. 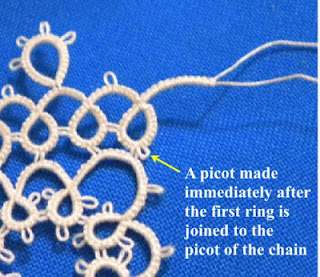 The second ring is then, first joined to the small picot of the first ring and then to the picot of the chain that was already joined by the first ring.  Looking at the work so far, I think this method of joining gives a firmer result in the sense that the tow rings do not 'wobble'  and lay flat.

There will be one more round after this, the scallop round, and this piece will be done.

My problems with Blogger in Chrome seems to be getting worse.  I still cannot leave comments and this time it doesn't matter if I was using the old interface or the new interface.  I've been trying to leave comments on some blogs that I have read but when I click 'publish', it just disappeared like I have not been there.  Every time I click 'view blog' from the dashboard it will show that I have not signed into my blog.  I cannot click the pencil icon below the post from my blog page to edit the blog because it is not there anymore.


So, I have gone back to using Firefox and all the above have disappeared.  I can't recall why I changed to Chrome in the first place!