Got all my material ready for the tatting to make the bunga rampai container to be used as part of the wedding gifts. 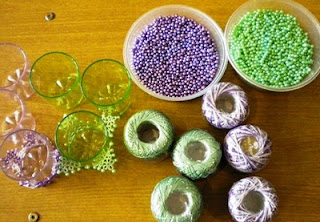 I made another design for the bunga rampai container.  This time I used a small cup/glass and designed an edging to surround the cup. 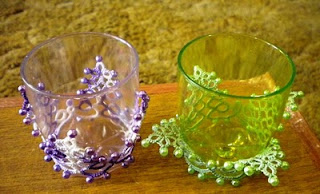 I tatted the same pattern for both green and purple but somehow it turned out differently when I place round the cup.  When I placed on the green one, it turned away from the cup.  Then I tatted the purple one and  place it on the cup it hugs the cup.  Now I am not sure which one looks better.  I plan to tat a smaller edging to place round the lip of the cup.  I don't have the design yet for it though, maybe I'll use the evergreen hen-and-chicks.

The thread that I will be using for this wedding project is Milford Mercer size 20 which I bought in Singapore.  I like the Milford thread because it is 6-ply. Over here, only the Cebelia has many colour choices, but thay are 3-ply and I don't really prefer tatting with 3-ply thread.  Getting the milford was not the only reason to go to Singapore, though.

I was not able to meet with Sheila when I was in the UK at the end of last year, even though I had planned to. As Sheila regularly visit Singapore, I decided to make the trip to meet her there when she wrote to say that she will be coming over. We agreed to meet in Spotlight, where I bought the Milfords.  As I also wanted to get some beads, Sheila suggested that we go to Arab Street for them.  That is where I got the green and purple beads.  I could have spent the whole day at Arab Street, if only for the beads and the findings and the notions, but that will have to be for another day.

From Arab Street we adjourned to Raffles Hotel for some tatting talk over tea.
That was when Sheila brought out all the goodies.

I received this pretty hankie from Sheila with tatted edging. Sheila then challenged me to produce something equal of her high quality work by giving me the pattern for the edging and a blank hankie.


Jessica showed a very pretty and delicate doily, about 10 inches wide, made with size 80 thread which I forgot to take a picture of.  I was ashamed to admit to both of them that I don't tat with size 80 much. Then there are these wonderful books by Pam Palmer.

That was one happy tatter who returned home that day, he he he ....

And happier still when, on the next day,  the postie delivered my pop-a-bobbin shuttle that I had ordered from Jane.  This one is in ebony.  This new pop-a-bobbin is slightly slimmer in size that the earlier one that I bought.  I like the new size better. 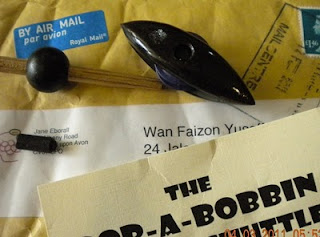 Email ThisBlogThis!Share to TwitterShare to FacebookShare to Pinterest
Tags edging, family and other things, gifts, tools of the trade