Have been tatting but not able to show any of it.  Instead, here are some bookmarks that I made when I needed a break from the tatting-that-cannot-be-shown. 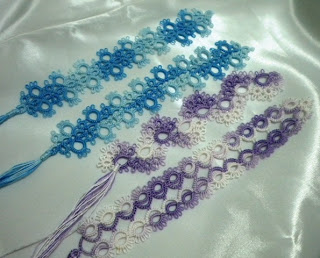 The top two in blue variegated are from the ever so popular pattern from Jane's blog.  I think this is a sure winner pattern to be used with varigated or multicolour thread because you can start anywhere along the thread and it will still give a discerning effect in the finished bookmark.


For the very top bookmark, I started in the middle of the same shade, which is the pale blue.  The result is a clear separation of the dark and pale blue along the length of the bookmark.  For the second version, I started  at the point of the change in the shade and what I got is a gradual wavy effect in the two shades along the length of the bookmark.

The other two, in variegated lavender, are adaptations from Mary Konior's patterns.  The third from top is the Curds and Whey from Tatting with Visual Patterns, and the bottom-most is the edging of the collar design, Rose Collar from the book Tatting Patterns.

The new shuttle that I received is the Winder Shuttle from Chris Hinton. 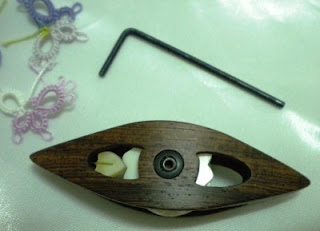 The ingenious thing about this shuttle is the winder tool that is used to wind the thread onto the bobbin. That small allen key shown above the shuttle fits into the notch in the middle of the shuttle. The thread is loaded into the bobbin by turning the allen key.  I can't recall the type of wood used for my shuttle but the surface is smooth to touch.  Maybe too smooth because the shuttle keep slipping of my fingers, LOL.  Aside from that, this shuttle is just the right size for me at 2.5 inches long.  You can read more about this shuttle from The Tatting Forums, the link is in the sidebar on the right.