Finally understood the single-shuttle split ring, or SSSR.  I tried a few times before but never could follow the instructions.  I was on chat in InTatters with Cannalure and Soyloquesoy and casually mentioned that I am having problems with the SSSR.  Being good tatters, as all tatters are, they guided me through as I attempted it and finally managed to get it done.

And to prove that I really did it, here are some of my attempts, 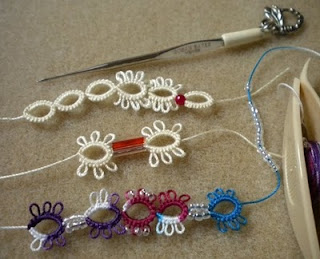 The creative mind then sets in and I decided to try adding beads.  First I made it using bugle beads, shown in the middle in the picture above.  Then I made another sample using seed beads.  I should have used another thread with the seed beads because it didn't show up very well with this thread.

I think I like the bugle beads better.  I can imagine pretty bracelets with some fancy beads made with this method, maybe two or three rows joined together side by side.

Another happy note, the postman dropped me a few goodies this past 30 days.

My first order of Lizbeth thread was the first to arrive. I have never bought any Lizbeth before though I have tatted with it using thread that I received as gifts.   BJ, the Sanguine Stitcher gave me a discount coupon from Handy Hands and I ordered these.  These are part of my birthday present form BJ.
The other part is this.  BJ is an expert quilter and she made a quilted carrier bag that is just nice for me to carry my tatting.There is also a needlebook, a ball of Cebelia and a book titled 'Gardens'.
Diane promised to send me some EZ-bobs when she read that I could not find any of them here. And they are the next thing to arrive.  Boy, did she send me some!  24 pieces in all.  Certainly more than what I was expecting.  Thank you Diane.
Finally, I ordered Ruth Scharf books from Georgia and they arrived the same day as Diane's EZ-bobs.  I was trying to figure out how to read the patterns because they are all in German.  Luckily, I received an e-mail from Georgia with some English translations of the German tatting terms.
All in, it was a good 30 days.