You may think that the motif here looks very odd. You are right. I am working on another edging and was trying out different shapes for the corner. Rather than cutting the thread each time and starting again, I made four corners at one go. You may not be able to see the edging well because I only make one repeat of the motif for each side. 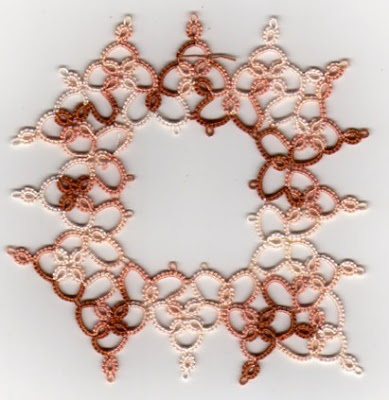 Okay, let me take you through it.

I started with the one in the bottom left. There isn't really a corner in it - looks like it got chopped off.

The second one, bottom right, is more interesting. I'll call this a filled corner because the actual corner was made later. The first part is like corner #1 except for the addition of the two rings off the chains. The other part of the corner is made later by adding additional rings and chains to it.

#3, top right, is similar to the first part of corner #2, except that one of the rings in the corner is a mock ring, needed to make the third ring in the 3-rings grouping.

This quartet didn't actually make to the end because I dropped the baton after the third corner, oops .... (excuse the pun even though it is intended, LOL) .... I mean the thread ran out of both shuttles. I cheated and quickly loaded the shuttles, before the officials realised what happened, shhhhh ....

I finished off the last corner, #4 in the top left. You can see that I have run out of ideas for corner #4 and just added a ring in between the two chains.

No medals for guessing which one I finally chose, although I would have liked to be able to make it in one pass. This design is now called the Sweetheart Edging 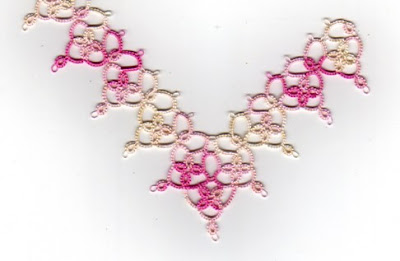 Note : The pattern for Heart o' Daisy has been added to the Patterns Page.