I had always shy away from bare thread tatting for two reasons;

1. I always had problems with estimating the amount of bare thread space to leave at the start of each new ring; and

2. How to add new thread when the shuttle thread runs out.

I still have issues with No.1 but have conquered No.2.  Sharing here is my method of adding new thread without making a knot.

In almost all of my shuttle-only project, I tat the first ring by folding the beginning thread end and tat the first few double stitches over it.  This is not a new technique.  Jane Eborall shared this method in her techniques website, http://janeeborall.freeservers.com/StartRingCatchThread2.pdf

I will come back to the reason why I start this way later, but you can get the idea after going through the following steps. 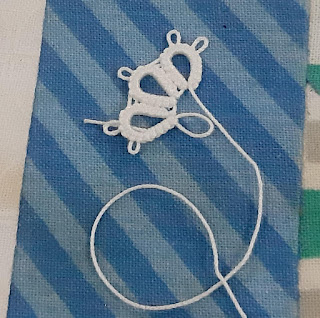 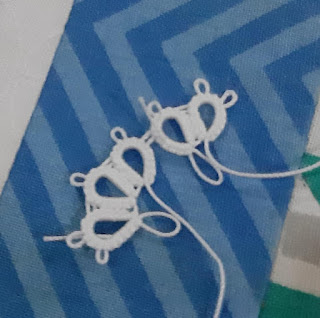 Step 3
Bring the tail end of the old thread through the loop on the ring with new thread. Pull the end of the new thread (that was tatted over) to close the loop. 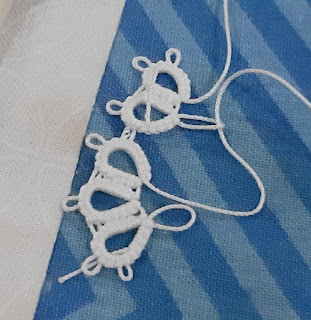 Step 4
Pull the end of the old thread to bring the two rings close together.  If you have bare thread pace between rings, adjust the thread to leave a space between the two rings.
I would sew-in the end of the old thread in the new ring, usually on the right side of the ring to reduce bulk in the double stitches.  If you prefer the magic thread method of hiding ends, you can add the magic thread to the new ring, but I prefer sewing in my ends, 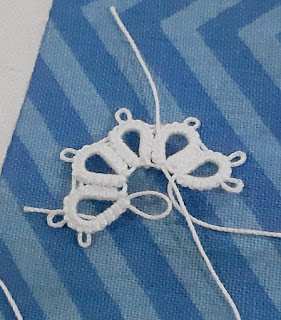 And now, the reason for starting with a loop at the first ring.  After I have completed the flower motif, I will draw the tail end through the loop and do as in Step 4.  This way, if I need not have to add new thread midway in the motif, I will only have one end to hide as compared to two ends.

As an additional note, I also use this loop in the first ring method to add a second colour to my project without tying a knot.

I do not pull the loop completely after adding the second colour.  I keep the loop visible so that I can use to 'tie-off' one end of the project (by way of Step 4), while the other end is tatted over in a chain.  This method of hiding in a chain is explained by Jane Eborall,  http://janeeborall.freeservers.com/HidingEndsNoKnot.pdf

By this method, I only have one end to hide at the end of my round or motif or project.