Met My Tatting Nemesis? I hope not!

I am preparing for the fifth round of the Norma Benporath Fairylike Lace by making a sample of the motifs of this round.  As I had expected, it is a challenge to me.

The fifth round  is made up of tatted wheels made with shuttle only. I have neve been able to tat these type of wheels satisfactorily before.  My challenge is how to estimate the bare thread space between the rings and making them consistent in length.  I'll explain with each photo.

I decided to use a gauge for the bare thread spaces. In this case I used a small strip of card paper which I folded in half. The fold of the card paper is placed on the thread when I make the first double stitch. 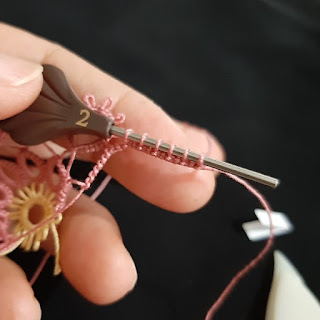 I seldom use a picot gauge but I decided to use one for the big rings because there are six picots in each of them.  I thought it'll make the picots look nice with them all of equal size. 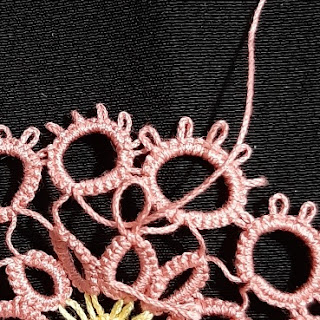 I tat the first ring, at the same time tatting over the tail but leaving a small loop of the tail thread at the beginning with beginning thread end visible.  After the last ring is made, I cut off the thread from the shuttle and pass the end thread through the loop. 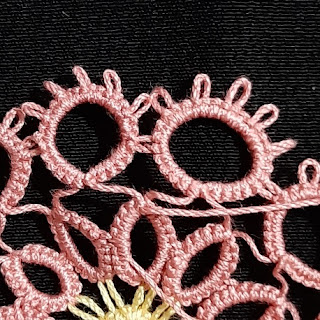 I then pull the beginning thread end (tatted over earlier) to secure the thread at the end, adjusting the bare thread to be equal with the rest of bare threads.  The thread end is hidden by sewing in. By this method, I only have one end to hide for each wheel.  I know I could make it easier by putting in a magic thread, but I am comfortable sewing it in. Just my preference. 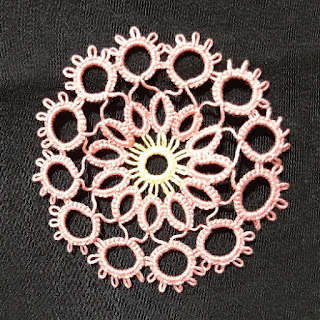 This is the wheel done. I can see that I still need to improve on the bare thread spaces, maybe shorten it a bit. The wheel is not laying flat, though you can't really see it from this photo. 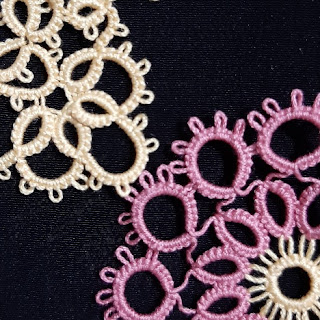 The picots in the big ring did not patch the points where I need to join to Round 4. I am supposed to join two of the big rings to the chain of Round 4.  As you can see, the 2nd ring is way out from the chain.  That is another thing that I need to think about..
Back to the drawing board!