Looking back at 2020 craft-wise, here is a selection of my work.  I think I have achieved a lot during the self-isolation, except for the limited number of times that I had to go out such as doctor's appointments. 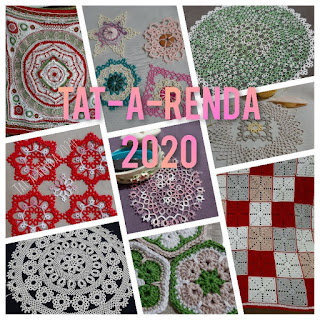 I managed to get a lot done, I think -
* hosted two tat-alongs,
* crochet two lap blankets
* started on a huge Jan Stawasz's doily which is still a WIP and I have no idea when I will finish it.
* worked on a few new tatting designs which I may or may not have shared the patterns.
For 2021, I had thought about looking again at some of the tatting patterns in the Trove site, and tatting them, maybe. Most of the patterns were published in newspapers in Australia years ago.  The most notable contributor of tatting and tatting patterns in the Trove is Norma Benporath.
To browse through the tatting patterns and articles in Trove, look in the category 'Newspapers and Gazettes'.
Not just patterns, there are also tips and anecdotes or just opinions about tatting.   Here is an example, which I screenshot, of a page from the Adelaide Observer published in August 1st, 1868. Click on the link for a better view. 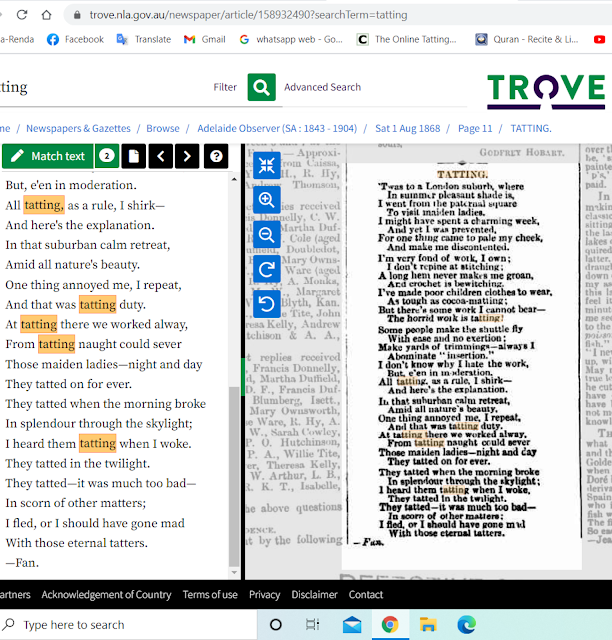 Looks like the person who wrote this is not yet a fan of tatting, 😁
I can spend a whole day just browsing through the articles and it is still not enough time, but that will take away my tatting time, 😀
I have bookmarked several pages with designs that I am interested to tat.  Will show them later, or when I have tatted them.