An Exquisite Lace in Tatting by Norma Benporath

After so many years since I last did one, I decided to try another Norma Benporath pattern from the Trove site.  This is the design that I have picked, 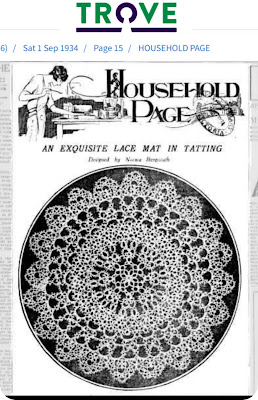 The pattern was published in The Australian on 1 September 1934 with the title, An Exquisite Lace Mat in Tatting.

If you wish to join me as a tat-along for this lace mat, you can download the pattern from the site.  When you open the link, there is an option in the column on the left for the download, choose 'PDF'.  The full pattern in given in two parts. You may have to click 'Next', or the arrow > a few times to get the 2nd part of the pattern which is shown together with a recipe for Apple Cinnamon.

If you decide the try out the recipe to enjoy while tatting this lace mat, do give a feedback of it, 😊😊

The centre is a single shuttle daisy with eight petals. 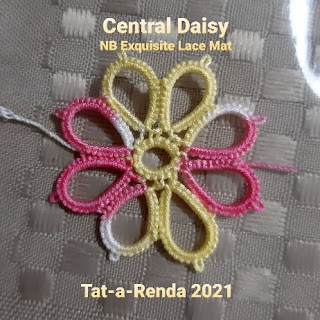 Below are some notes on how I tatted this centre. 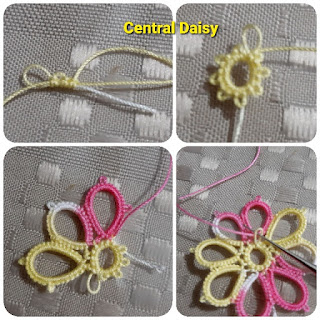 1. (top left) It is good to hide the tails at the beginning and prepare to hide the tails at the end. Before I start, I fold the thread to make a loop and hide the beginning tail with the first few double stitches (ds).
Jane Eborall described this method clearly in her tutorial, http://janeeborall.freeservers.com/StartRingCatchThread2.pdf
2. (top right) I leave the loop visible when I close the centre ring, which will be used later.
3. (bottom left) Make a lock join to the next picot of the centre ring before starting the next petal of the daisy. You will need to the the folded join method to join the last petal to the picot in the first petal, or this method used by Jane Eborall, http://www.janeeborall.freeservers.com/JoinlastRfirstring...
4. (bottom right) After completing the final petal, I cut off a length of thread (about 12-15cm) and bring it through the small loop that I have kept at the beginning. I then pulled the tail end of the loop to secure the thread, then I sew in the ending tail.
Note: You may use the magic thread method to hide the ending tail, but I am always comfortable sewing it in.
I am not planning to draw a chart for this pattern like I did the last time, but I will be sharing photos after each round.