The tatted wheel is one of a number of basic tatting motifs, tatted with shuttle only. This motif is common in the early tatting books/booklets.  It can be with a small ring in the centre or without. What I can say is that it is not as simple as it says in the pattern.  This post is about tatting that wheel with a ring in the centre. This is a sample that I tatted recently, 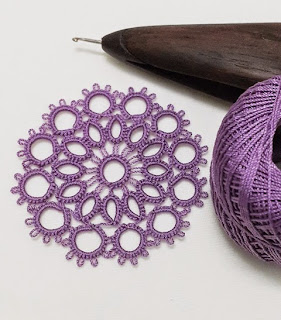 Now, I don't know about other tatters, but there are a number of things here that is a pain to me.

Note:
That small ring sometimes also make an appearance in patterns with rings and chains, as seen here; 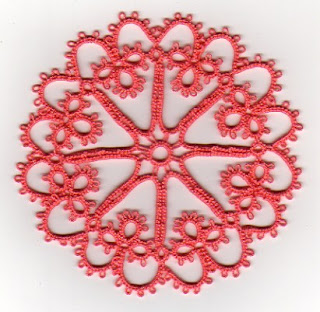 Most early patterns would ask you to tat that small ring, cut the thread and tie into a knot to complete the number of picots required.  Then you tat the outer round and join to that small ring as you go.

While I have not really found a fail-proof solution for estimating the bare thread space, there are now ways of making that small ring in one go as you tat the outer element.  Here are two methods that I have used to get out of having to cut-and-tie for that small ring.

For a ring attached to a ring as in the firt picture, it is not quite as straightforward. Thankfully, there are are wonderfully clever tatters who have come out with a method of avoiding the cut-and-tie for this case. There is now a technique of making a ring on a ring with shuttle only, also referred to as loop-tatted ring.  With this technique, I was able to do this, 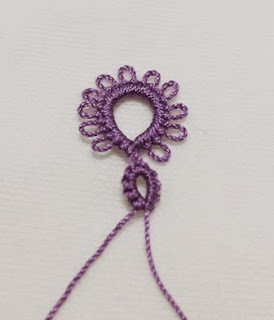 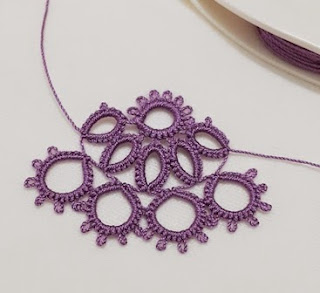 Here are links to tutorial for this techniques available online,
Karen Cabrera's video and Jane Eborall's tutorial in printable form.

However, I ended my loop-tatted ring in a slightly different way from the ways shown in the video and in Jane's instructions.  In both, the shuttle is passed through the final loop and the end result is the thrown ring touches the ring that it is 'sitting' on.  (I hope this makes sense).  In the case of the small centre ring, I need to leave some space to make up the number of picots in that ring. 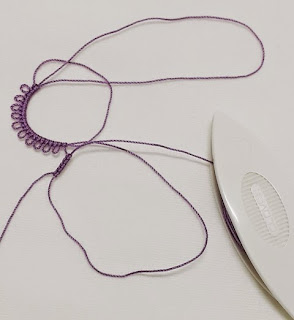 If you observe the photo above, you'll notice that I have left a small bare thread space before starting the loop-tatted ring (with picots). This bare thread space will complete the number of picots needed in that small ring in the centre.

No more flimsy small rings to cut-and-tie and ends to hide.

Thank you for your comments. I really appreciate it