Time to tackle the Cluny

I have not actually attempted cluny tatting (or leaf tatting) before.  No, that is not right.  I did it once before, just once a long time ago, learning ot through the Online Tatting Class. I thought I had a picture of it somewhere - now I couldn't find it.  Maybe I did that before I started blogging.  Oh, nevermind.

Anyway, it is about time that I make a serious attempt of learning it ang there is no better way than to do a project that requires it.  I had this pattern for a doily printed then but had put it away.  It surfaced one day, which is another reason for this sudden urge to try the cluny again.

The pattern is Pam's Round Robin Doily available online  from Mimi Dilman's website,

I started on the frst round with a size 20 thread which happens to be what I already have on the shuttle. Here is a icture of the first round, 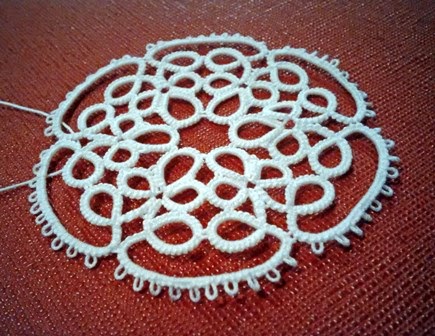 I was very happy with it but realised that I made a mistake in the long chain when I wanted to join the 2nd round to it.  I misread the pattern and was short of one picot in all the long chains.  Could not do much with this, but it does make a neat little motif on its own so I'll keep it for when I have a use for it later.

After finishing a project with size 60, somehow size 20 doesn't feel so nice anymore.  So, I decided to use a size 40 thread for the second attempt, since I have a lot in that size.  The colour is bright yellow, though it may not look so in this photo. 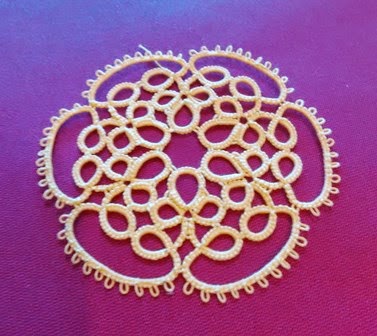 The next three rounds are all chains, so I may be able to post a photo of that soon.

Email ThisBlogThis!Share to TwitterShare to FacebookShare to Pinterest
Tags Pam's Round Robin doily