Close call with the RR Doily

Finish the 2nd stage of Pam's RR doily, with a very, very close call, I must say.

The 2nd part of the RR doily is made up of three rounds of chains.  I pulled what I felt was enough for the core thread for all three rows and started with CTM.  There is no need for tie-and-cut after each round. Things got frantic as a approach the last few repeats in the last row with only about four inches of thread left on the shuttle.

After tatting the last repeat, there is only just under two inches of thread left.  I usually sew in my ends, and that much of thread will not be enough to sew in.  Had to resort to the other method of hiding ends, the magic thread.  I don't use this much but it is good to know for cases such as this. This is the state of the RR doily afer stage 2. One end hidden with magic thread and the other (ball thread) sewn in. 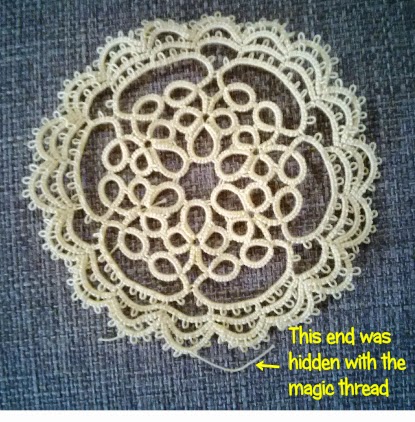 Here are a couple of links for an explanation of the magic thread method,
http://tatsaway.blogspot.com/2010/09/dealing-with-ends.html
http://www.tattedtreasures.com/2011/10/how-to-hide-ends-with-the-magic-thread-trick/