A Mystery and a Whodunit

No secrets that the Mystery refers to the Mystery Doily that have been my obsession these past few months. I had wanted to finish Round 5 before sharing a picture but I ran out of thread in one of the shuttles so I decided to share it at this point before continuing with a full shuttle.

Oh, by the way, I was asked about the amount of thread used for the doily.  I have not set out to measure the thread used so I can only give an estimate based on the number of times I had re-load my shuttles.  I am using Lizbeth size 40 in two colours, a solid and a multi-coloured.  Up till now, I am on the fourth shuttle-load of the solid thread, and  used up five full shuttles of the multi-coloured.

I will be loading the shuttle with the multi-cloured thread for the sixth time to continue with Round 5 and expect another full shuttle will be needed before I finish Round 6.

This is the status at Round 5, with just a bit more to finish the round.  As it is, the doily is laying reasonably flat without any need for blocking - just the way I like it.
Below is a close-up to show Round 5. 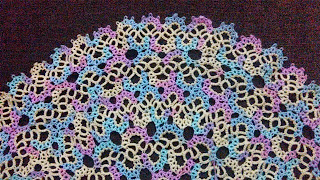 While all the earlier rounds were rather smooth (except for that mistake in Round 4), Round 5 has several points to take note of.

Secondly, by the way that the inner clusters were joined to Round 4, the blank round spaces alternates between small and big.

The picture below illustrates the points that I am trying to make. 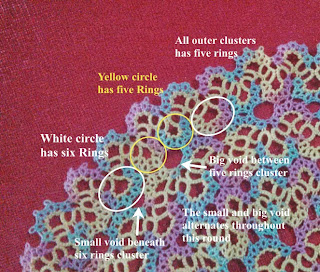 Then, I took a break from trying to unravel this Mystery and was treated to a whodunit - a theatre play of Agatha Christie's "The Mousetrap"!  The theatre company performing this play is currently on a tour of this region.  Agatha Christie was one of my favourite authors when I was in school and still is.  I used to catch episodes of the Hercule Poirot series on the cable tv.  It was a rare opportunity to be able to watch the play, which I thoroughly enjoyed.