Another update and a new challenge

First, another update on the doily.  The scallops are all done and at this point the doily measures about 8.5 inches wide.  The next round is not really a round on its own but a combination of several parts together.  I have finished one component as seen in the picture below. 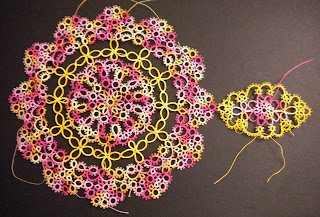 The shuttle-like ovals will be attached to alternate scallops and the space between the ovals will be filled by another component.  More later on how I plan to proceed with this doily.

If you have been following my blog for the past year or so, you would have read that I took to challenge myself to tat Norma Benporath's tatting designs made available online from the Trove website.  The patterns were published in newspapers as far back as the early 1920s and 1930s.   One of the early ones that I tatted was this lace mat from here. 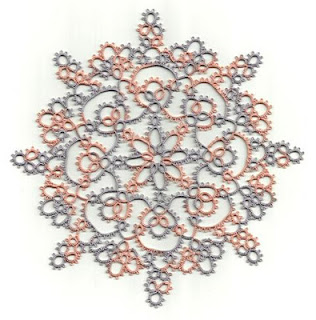 Naturally, the way the patterns were written are very wordy and lengthy and utilising only the basic techniques.  When tatting these patterns, I have used techniques more commonly used today, such as split rings and split chains.  It has always been at the back of my mind to re-write these patterns, or have charts drawn, and share with my readers.  I was not sure of the copyright issues, if any, on this and besides, other projects have deferred me from looking into it earnestly.

However, that urged finally took over and I sent an e-mail to the National Library of Australia (NLA), the body that publishes the Trove site, stating my intention and asking for their views on it.  The reply was very prompt and with happy news.  The gist of it is, the NLA do not have any objections for me to re-write the patterns using modern notations provided I cite the original source of each pattern.

That will now be the latest challenge for me. I plan to start by making charts of the patterns that I have tatted starting with the doily above, and share them on my blog here.  Hopefully, I can play my part to preserve these wonderful patterns and share it for the enjoyment of other tatters as well.

Be forewarned - this will be a slow-going challenge, so don't expect much so soon.