Continuing with the NB Doily

After a slight detour, which I will write about later in the post, I have picked up the NB doily again, to start on Round 4.

This round is made up of scallops (or half-wheels).  To recap from earlier, if following the original instructions, there are many cuts-and-ties in this round.  I have reduced that by tatting part of Round 4 in Round 3, as I wrote here.

There are some interesting observation here.  Based on the scanned image from the website, the scallop should have seven small inside rings and seven large outside rings.  But, the way that the scallop is tatted, I can't see how there can be equal number of inner and outer rings in it.  This is my first attempt of the scallop, 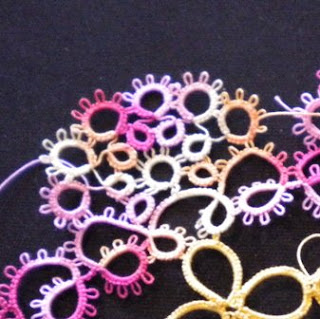 Seven inner rings will only give me six outer rings, where as the pattern requires seven outer rings.  After much thought, I modified the scallop as below to get one extra outer ring to prepare for the next round.  But, int he process, I had to also  increase the inner ring to eight instead of seven. 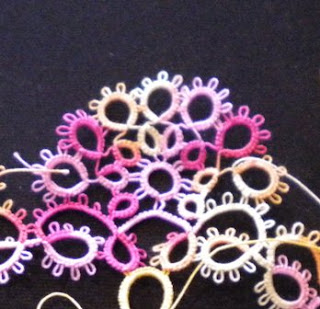 The finished scallop lay quite flat and not ruffling even with the extra rings so I will stick with this.

Here is a picture of the two version side by side, 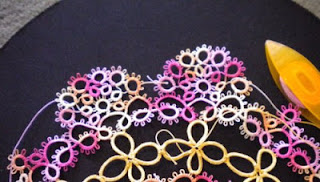 I was also trying to see of this round of scallops can be done with one round.  I thought I can tat the last ring on one scallop as a SSSR and jump to the first ring of the next scallop also with a SSSR.  But, I have not found a way of tatting SSSR when there are joins in the SSSR.  So, the scallops here will be done individually and loads of end to hide, :(

In the course of tatting this Norma Benporath pattern, I was inspired to design a new motif which resulted with this design here.  When I see the void on the centre, my first thought was "a doodad!" and who better to test it than the two doodad trailblazers, Fox and Diane.  I think they have done a wonderful job with the design as can be seen here tatted by Fox and this version by Diane.  Thank you ladies! I could not have done it better myself.