I have been practising, all of two days in fact, to understand the movements of the interlocking rings. My main issue was to get the rings to overlap in the same directions throughout, but all I was getting was this kind of imperfections. 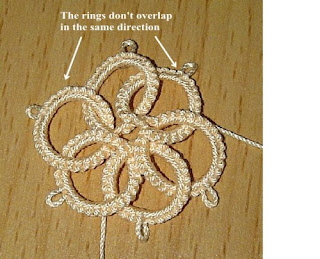 I know there is a way to get it, but it just did not come to me.  After many tries, I had no problem following the video for the other rings, but that last ring is not getting it.

Finally, I have it and the picture here proves it,

Notice how the rings are all overlapping in the same directions through out.

After much trial and mistakes and re-opening of rings, I realised that it is how the thread is wrapped round the fingers for the last ring that determines the final ring's overlap position.  I could not get that part clearly from the video.

Here, I am sharing a picture of how I looped the thread round the fingers to make the final ring. 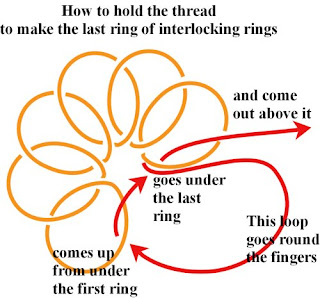 In this picture, the bottom-most ring is the first ring tatted and the right-most is the last ring before the final ring.

After you have cut the thread enough for the last ring, arrange the earlier rings so that they are overlapping correctly.  Pinch the rings with the thumb and first finger so that they don't move.  Take the thread for the final ring and bring around the fingers. Pass the end through the first ring from below upwards, down under the last ring made and up over it. Make the final ring and close as usual.  Straighten the rings out as required.