I have read all your comments to my previous post, where I first wrote about the subject.  At that time I didn't have a name for it.  I wasn't sure if it made any difference or if it is worth pursuing.  However, encouraged by your comments I looked at it further, and for discussion purposes I am calling this a pointed chain.

I made another sample motif again with three different version of chains joining the rings, 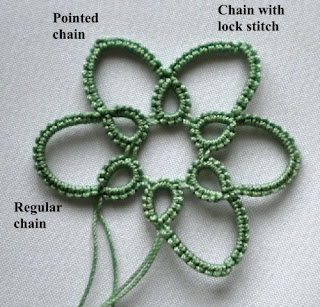 The first chain is a regular chain and the second is the pointed chain.  The third chain is made with lock stitch at the top, as per Miranda's comment (copied below)

Miranda said...
Oh yes, I can see the difference. It's like a Gothic arch. I sometimes achieve this look by doing a lock stitch at the top of the curve. Is that what you did?

I can see differences in the three chains by the different methods.   The regular chain is rounded and the pointed chain has a point, of course.  The lock stitch method also creates a point but the curve is not smooth where there is a slight jump before and after the lock stitch is made. (The fifth chain is also with a lock stitch and you can see the jump better in it)

I hope you can see the extra thread width added to the upper part of the chain even with the picture being blurry due to it being highly enlarged.