My earlier post on roll tatting brought some comments asking what roll tatting is. I'll try and explain here through some pictures.

Roll Tatting is so called because the thread are not knotted but rolled over the core thread.
An explanation of how the shuttle is moved to get the roll effect on the core thread can be seen through these two links, JaneE's explanation and Karen Cabrera's video. What is important to remember is that there is still the flip because you need to transfer the roll from the shuttle thread to the finger thread.

I find it easier to make the roll stitches in groups of not more than 10 rolls at a time.  After each group of 10, I gently push the rolls, after it has been transferred to the finger thread, to stack it close together, like so ..
You need to keep the pinch on this stack of rolled stitches because they can easily un-roll since they are not knotted as the standard double-stitches are.

The pattern that I am working on when I took the photos above is the Stumpy bookmark by Kersti Anear. I was looking for easy patterns to practice my new-found ability and felt that it would be a good one because there are no decorative picots in the design.
The roll tatting parts are on the outer side of the rings.  I substituted one double-stitch with two roll stitches, but looking at the finished Stumpy, maybe it should have been more.  Here is a close-up picture. 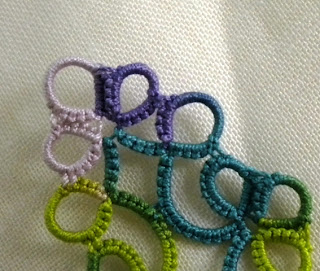