This post was prompted by several e-mails that I received asking me how to hide the thread ends after the tatting is complete.

Tatters don't like to deal with many thread ends, or at least I have not come across any who look forwards to having loads of ends to hide.  So the best way of addressing this is to reduce the number of ends to hide.  This takes a little bit of planning even before you start tatting.

It is always good to start with continuous thread (CTM) whether working with shuttle-and-ball or two-shuttles if you can, (pic 1).  You have already reduced one pair of ends to hide.

If you are working on motifs that are worked in rounds, study the picture or the chart and see if you can utilise split rings or/and split chains to jump to the next round.  You will be spared hiding ends after each round.

But, there will still be that last pair of thread ends when you finish your work.  I am sharing here two methods that are often used to hide ends.  These are not the only methods to use.  There are other ways to hide ends but I have not tried them before, so I cannot say much about it at this time. 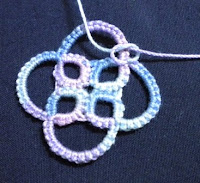 One method that I often use is sewing in the ends.
When you have made the last chain (or ring - I am using the chain here as an example) cut a tail of about 6 inches of both thread.  Tie the ends to the beginning of the motif with a square knot.

Thread one of the ends to a blunt needle and sew in the thread in between the double stitches, going in first in one direction and coming back again in the opposite direction, (pic 2).  After each pass, give the thread a slight tug to make sure that the thread is pulled under the caps of the double stitches.  Do this over a number of double stitches.
Do the same with the other end but to a different part of the tatting.  For example, if the first end is sewn into a ring the second end can be sewn into a chain.  Trim off the excess threads close to the tatting, rub the stitches where the cut is to hide any trace of the cut ends.

Another method is often referred to as the Magic Thread Method.  This method requires pulling the end through the double-stitches with the aid of an another thread.  Again, study the design and pattern to see where is the best place for you to put in the magic thread.  In this example of the same pattern as above, I have started with the CTM. I have decided to add the magic thread in the first chain because that is where I will end the motif.

Before making chain, cut off a piece of thread, preferably in contrasting colour and thinner than the thread you are using for you tatting. Hold your tatting as you usually do  when making a chain.  Fold the magic thread into half and lay it over the core thread of your chain.  Make sure the the curve of the fold is facing the opposite way of your chain progression, as shown below.

Post the other thread end through the other magic thread, and pull it to bring the thread ends into the double stitches, as in the picture below. 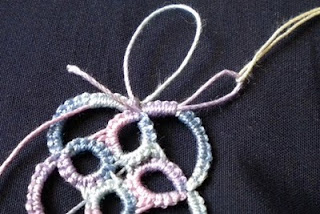 Here are the two samples of the motif with the ends hidden, one made by sewing in and the other by the magic thread method. 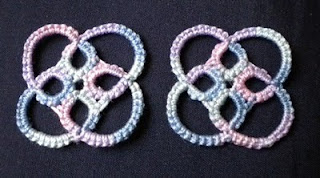