A Promise is Made

Last Sunday was a joyous day in the family when my niece got engaged.  In eastern cultures, an engagement is not just about a boy giving a girl a ring and she accepts, end of story.  Here, it is an occasion that involves the whole family, requiring lots of preparation that culminates with a ceremony of placing the ring on the girl's finger.

It begins with a merisik, where a representative of the boy's family meet the girl's parents to enquire is she has been promised to anyone.  Once it has been ascertained that she is not yet betrothed, a date is fixed for the boy's family to come and formally ask for the girl's hand.  This is called meminang where the date of the engagement ceremony is set.

On the fixed date a delegation from the boy's family arrive at the girl's house bringing the ring and other gifts for the girl.   Usually the gifts will be in odd numbers, from 3,7,9, and so on.   On the part of the girl, there will also be gifts given in return, usually two more than received. This ceremony is termed the bertunang. At this time the date of the wedding or the duration of the engagement is decided and the terms of the dowry is set down.  Another interesting aspect is that, if the girl who is getting married has older unmarried sisters, then gifts are also given to the sisters. And, the boy is not present during any of the ceremonies.  His appearance is only required during the wedding.  The ring is placed on the girl's finger by the mother of the boy or any senior female relative.

But in these modern times, a lot of the steps involved are reduced or combined into one ceremony.  The merisik, for example is not carried out because the boy and the girl usually would have known each other much earlier.  How else would they have decided to get married!

Anyway, in the case of my niece, we agreed to prepare seven trays of gifts and receive five trays in return. Here are the gifts from the girl's family. As you can see great effort is taken to dress up the gifts for the presentation. 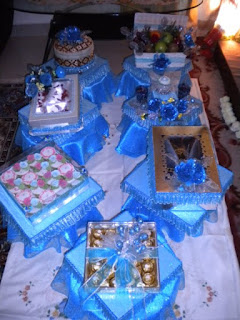 As to what make up the gifts depends on the status of the families.  They can be really expensive or simple ones.  In this case, among what we have prepared are a tray of cupcakes, a box of chocolates, a piece of material for the wedding attire later, a basket of fruits, a prayer mat and basket of traditional sweets. And the mandatory one is the ring.  Yes, the boy also gets an engagement ring from the girl.


And this is what was received from the boy's family, 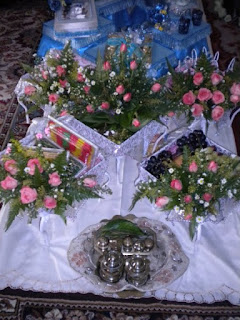 The most important item from the boy's family is the tray shown right in front.  A bigger picture is shown below. 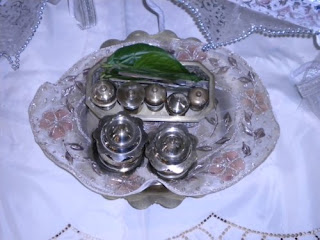 This is the tepak sirih or a betel leaf set.  The tepak sireh is an important part of the Malay culture. It has been used in all customs and traditions since way back when, as an opener to what will be discussed.  If you imagine having a discussion over a cup of tea, then the tepak sireh is that cup of tea.  In olden times, the folks would actually prepare the betel leaf and ate it as they conduct the meeting or discussion but that is not done anymore. 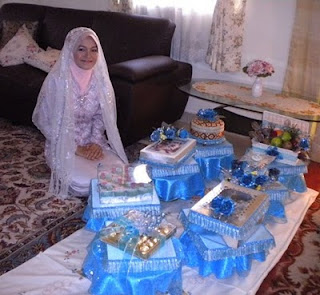 This is a photo of my niece with the engagement gifts, anxiously waiting for the arrival of her future in-laws.
If you have managed to stay on this far, you must be wondering, "Is there any tatting in this?'  after all it is a tatting blog.  Well, there is, a teeny tiny piece here. 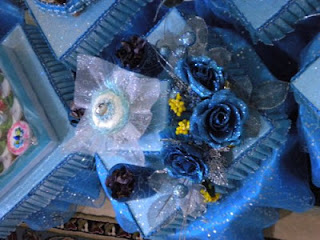 Where?
Here is the close up.  It is the tray that holds the engagement ring.  I made the ring holder and decided to add a small circle of tatting to surround the ring. 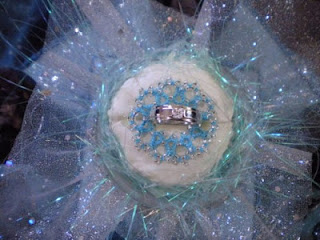 The sequel to this post will be about the wedding.