Oh Darn! Not at this point.

Another exasperated tatter!  Can you see what is causing this? 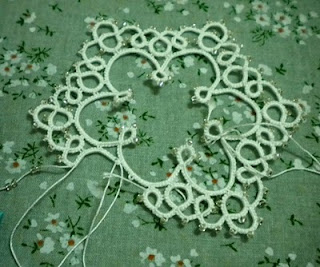 I was so eager to finish this last repeat of the motif.  When I reached the last chain, then only I realised that I had made it short of one picot.  That chain should have 5 picots and I made this one with only four.  Worse still, I started the next round at this 4-picots chain.

If I had noticed it early on, I would have saved the time (and thread) and start the first round all over again.  I don't think I could have corrected it because I had cut off the thread after that first round.  This is destined to the bin ... after I have salvaged the beads, that is, :)

In case anyone is wondering,
"Now, why did she leave the centre gaping and empty like that?"

Well, I started this with Round 2 followed by Round 3.  Round 1 is to come after I had completed Round 3.  I suppose you can say that I am working this motif outside-in as opposed to the usual working of inside-out.  This is a sketch of what it would have looked like when finished, drawn on a polar graph paper. 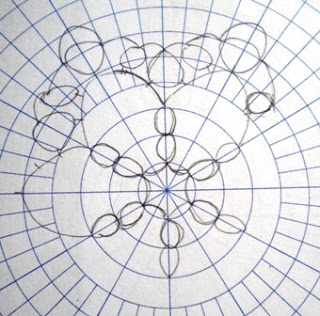 I deliberately started on the middle round because by doing so, I will not be restricted by any stitch counts.  If I had done the centre first, I had to really gauge the stitch counts of the next two rounds so that they fit in with the centre.  If they are small in number, the motif will cup up and if more, I will end up with ruffles. It is possible for me to do that here because the rings in the middle round are not joined to each other.

If everything had gone as planned, when I finished the outer round, I just need to see how big the gap in the middle is and close it up with a suitable design.  Looking at the tatting that I had done so far, before I realised the blunder, the centre may turn out different from the sketch.

Oh well, tomorrow is another day!