I have been on the receiving end of a couple of lovely gifts recently.

First up is this collection from Diane Merlock in the US. 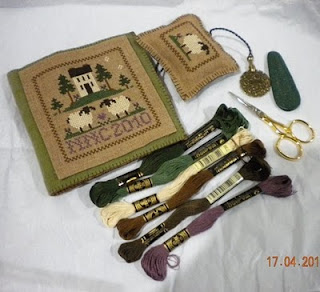 This is from an exchange in the Needle-and-Cratfs group to mark the 3rd anniversary of the setting up of the group.  I received a needlebook with some needles included and a fob, both finely stitched by Diane.  Diane has included some embroidery floss in the same shades as the thread used to stitch the needlebook and the fob.Since I don't stitch myself, I will probably split up the skeins of floss and use them for tatting.
Attached to the fob is a pendant thread cutter, which has been in my wishlist for the longest of time. Also included is a pair of scissors with its casing.  Thank you, Diane.
The other is from Paula of Needles, Hooks & Paperback Books. I won the giveaway that Paula hosted in her blog in March. 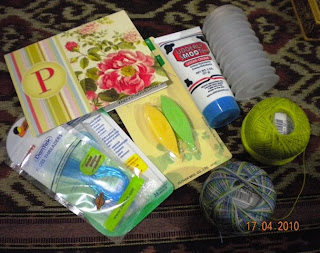 I received two balls of Lizbeth in size 20, Spring Green (680) and Springtime (115). Then there are the two shuttles also in spring colours.  a stack of EZ bobs (10 pieces), a tube of hand cream and a pretty card with roses on it.
There was supposed to be a bar of dark chocolate with this, but I told Paula that she need not send it because it will just melt by the time it arrives. When Paula asked if I needed anything in place of the chocolate, I asked for the floss threaders.  I have been tatting with beads a lot lately and I only have a few of the floss threaders left.  I can't find this type of floss threaders here.  What I have been using were also part of an exchange.  What Paula sent me is going to last me quite a while. Avery generous gift from Paula, thank you.
I have made something using the Lizbeth thread which I will show in the next post.