Wrap-stitch Round a Plastic Ring With Needle

I wonder ... has anyone done it this way before? Or, have I stumbled across something new!

I received an e-mail from Alan asking if the patterns in my book, Tatting With Rings can be needle-tatted. Well, the patterns in my book were developed with shuttles. My only experience with needle tatting is limited to the basic rings and chains, but the thought of using a needle with the plastic rings gives an interesting challenge. I gave it some thought and started working on this idea that I have. I think I may have got it.

I am going to share the steps here. I would appreciate very much if they could be tested out by some of the needle-tatters among us to see if it can actually work.

Step 2 - the second half of the double stitch
Bring a loop of the needle thread down under the plastic ring and slide the needle through, pulling it all the way.

You have made the first double stitch over the plastic ring.

The different colours used in the diagram are for illustration purposes only. 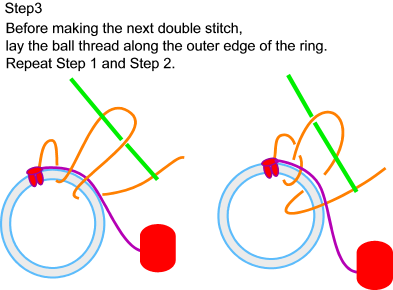 Now you have two double stitches over the ring looking like this. 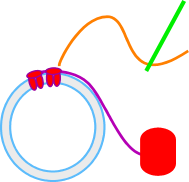 To make the outward tatted ring, tie a knot with the ball and needle thread and make a ring as you would normally do with a needle, bringing the double stitch as close to the plastic ring as possible.

After making the outward ring, make a knot again to switch the position of the two threads. Repeat the steps for the next set of double stitches over the plastic ring.

I would love to hear what needle-tatters think of this.