Based on my observation of the tatting patterns available in general, split chains are seldom used as a design element. It is more commonly used as a way of jumping into the next round of tatting without the need to cut the thread. And ... tatters hate dealing with thread ends.

Well .... to help you along, here is a tutorial about split chains.

Then R(5+2-5) joining to the picot of the previous ring. Continue until you have six rings in all. You should have something looking like this. 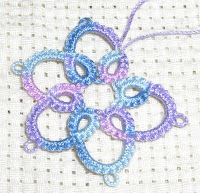 The point to begin the split ring

In the usual way, you would make the last chain and join to the first ring, cut off, tie and hide ends. With the split chain method, for that last piece of chain make 6 double-stitches and stop there. This is where we start the split chain.

Make a lock join with the shuttle thread to the base of the first ring. Do not pull the double-stitches of the chain close to the join. Instead, leave approximately 2/3 to3/4 of the length of the remaining chain that you need to do. You'll end up with the picture below. The bare thread will be the core thread for the double-stitches for the split chain. 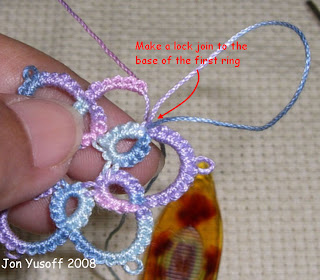 Lock join to the beginning ring, forming the core thread of the other half of the split chain.

What we are going to do next is make the double-stitches from the other end of the chain and work backwards to meet the other half. Bring the shuttle thread up from under the bare thread and pass the shuttle through the loop. 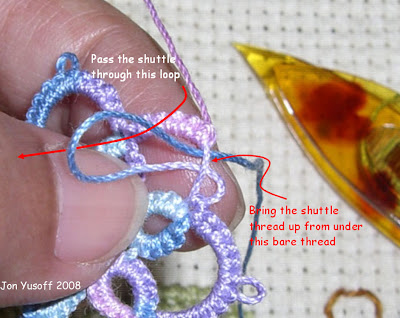 Making the second half of the double stitch

At this point you must be thinking that you have made a mistake because what you have is a thread that is looping around and doesn't look like a double stitch at all. Don't worry, we are not done yet. Next, bring the shuttle thread down under the bare thread and slide the shuttle through the loop that is formed. 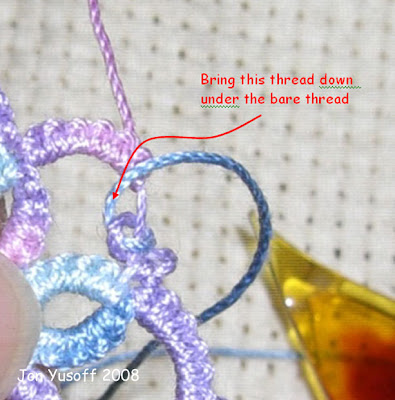 Making the first half of the double stitch 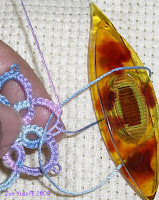 Pass the shuttle through 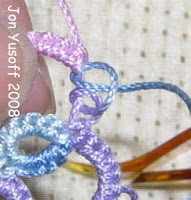 Loose form of the double stitch 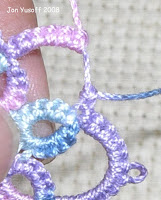 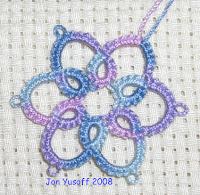 This straightens out the twisted thread earlier to form the shape of a rather loose double-stitch.Tighten up the double-stitch by adjusting and pulling the thread. This completes the first double stitch of the split chain. Make five more double stitches by the same method and finally what we have is the completed chain (right) with the thread from the ball and the shuttle meeting at the centre.

With the thread in that position, you can start the next round by making the first ring, or a chain depending on the pattern that you are following. No need to cut the thread!

In my example here, it will be a split ring. Common sense says you'll need two shuttles to make a split ring as I had shown in an earlier tutorial. But, this time I had asked you to use a shuttle and ball! Don't worry, there is a way out of it.

Make the first half of the split ring with the shuttle R(3-3/..). Leave a small space from the chain when making the first double-stitch to form a mock picot.

Now, we are going to use the thread from the ball to make the other half of the split ring. If you are using a big ball of thread, I can see that it is going to be difficult to move the ball as a shuttle, and you may have to enlarge the loop of the ring to slide it through.

Now that you know how to make the split chain, there is another way. Right! The split chain way! Before you start, I suggest that you tie a rubber band (or something) round the ball to avoid excess thread coming off the ball. 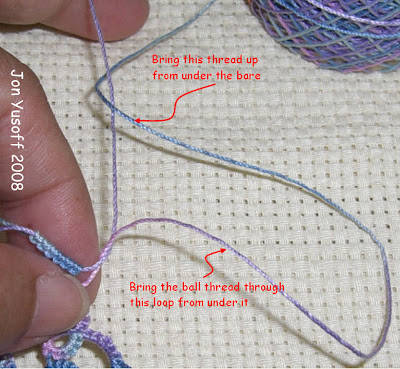 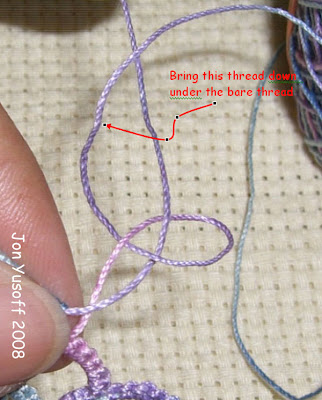 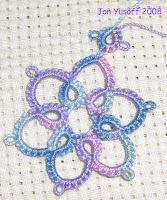 Complete the rest of the double-stitches and close the split ring.

Most patterns won't tell you where to make a split chain. Sometimes, the point where the pattern starts makes it unsuitable to use a split chain. My suggestion is that you study the pattern carefully before starting. A pattern with a chart or a clear picture of the design would be very useful. You may have to change the starting position of the pattern to be able to use the split chain to climb out into the next round.

For all the trouble, I think it is still useful to know this technique. Have fun trying.